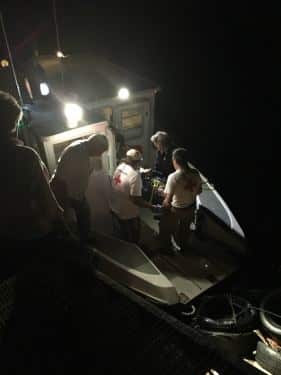 When Irish painter Lance Wilson suffered a stroke 18 months ago he did not know if he would ever be able to pick up his brushes again.

But now he is back creating his motorsport paintings, with fans of his work proclaiming him to be “back on form”.

Vilamoura-based Lance Wilson told the Algarve Resident: “I moved to the Algarve to be able to continue my work but when I suffered a stroke I had to give up painting. I was very lucky because I have no physical problems from the stroke thanks to the hospitals in Faro and Lisbon but memory problems stopped me from working.”

A few weeks ago, Lance started to try and paint again and put a few of his efforts onto his Facebook page where they have been met with great support, encouraging Lance to continue.

Lance said: “The only real problem I have is that since the stroke I find it hard at times to be able to concentrate on what I am doing. This means that I can start a painting but after five minutes I stop and wander off to do something else!

“The artwork is coming on though and, according to many of my old customers, I am back in form. But it came as a surprise to be contacted by Alan Carter who asked me to supply a painting for him and his team.”

Lance worked with Alan Carter during the 1980s when he was a successful rider but is now painting images for his new Classic Racing team which will be used on merchandising and sponsorship items.

Many of the paintings created by Lance Wilson have been bought by industry insiders keen to have memories of the sport immortalised in art.

An image of Craig Jones, the Parkalgar Honda rider who was killed while racing in 2008, was also painted by Lance in his memory.

For further information about Lance Wilson and his artwork, please email lanceraceart@eircom.net