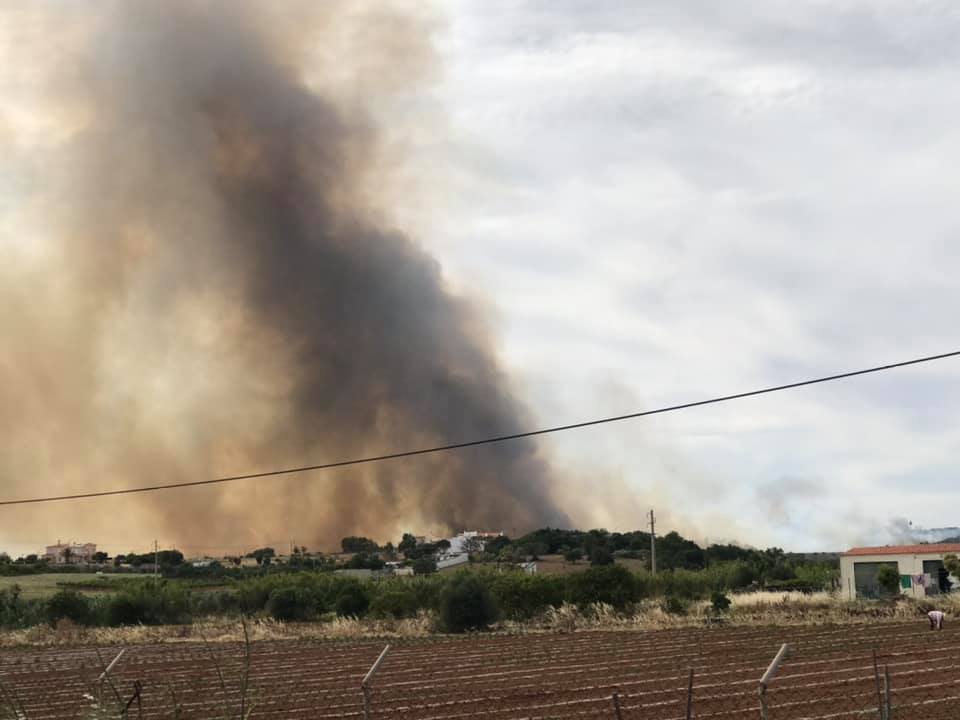 Over 130 firefighters backed by over 40 appliances and three air support are battling a ‘major incident’ near Altura, Castro Marim this afternoon which has seen flames ‘come over the barriers of the A22 (Via do Infante) motorway.

High winds are making combat all the more difficult.

For the time being, no homes appear to be in danger, but authorities are struggling against the difficult conditions, while traffic on the A22 is being diverted.

Luz resident Nikki Weijdom was returning from Spain this afternoon when she drove straight into the drama.

She has written over Facebook that it was “very scary…the fire was starting to come over the barriers. Very nearly drove into it. Thank you to the air supply for dropping water on our car, though being the first car to drive down the A22 the wrong way for 1km was nearly as frightening”.

Said Abel Gomes, operational commander of Civil Protection in Faro, early this evening: “this is a fire that is moving with great intensity, naturally fed by the wind which is blowing very strong and creating a lot of difficulties”.

The fire is being tracked by authorities as well as the ‘fire season’ Facebook group ‘Associação Alerta de Incendio Florestal/ Forest Fire Alert”.

UPDATE: the fire was in ‘conclusion’ by nightfall.

The Resident heard from Sharron Ellis working out of an animal rescue centre in Cacela that had to evacuare 53 dogs and three cats. One dog ‘escaped’ in Cabanas as she was being transported so anyone finding a frightened dog in the area should get in touch with Ms Ellis on 926 767 944. See our briefly news for a description of the dog, which is described as ‘very nervous with an obvious limp’.

In the meantime, Ms Ellis wanted to thank everyone who turned up to help in the panicked evacuation, including GNR agents who she says “were amazing”.

“People arrived who we didn’t even know. We are all so grateful to the firemen and the GNR”: