Portugal Resident
Home Portugal News Over 1,000 turn-out in Lisbon to protest against bullfighter who left 18... 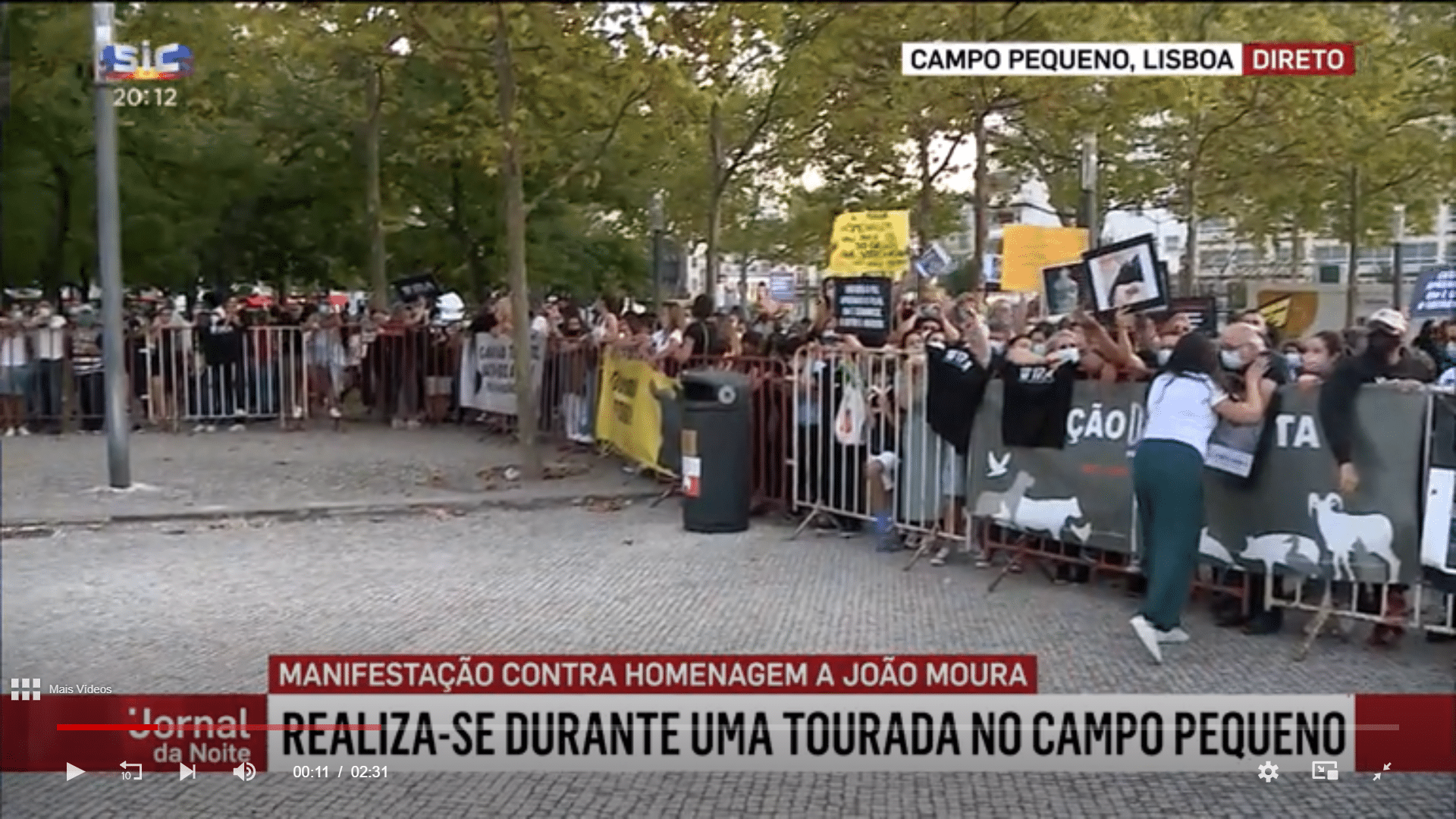 Over 1,000 people turned out in force yesterday outside Lisbon’s Campo Pequeno bullring to protest against a ‘homage’ to ‘picador’ João Moura – the man who ‘hit the headlines’ last year for the deplorable conditions in which he was keeping greyhounds at his Portalegre farm (click here).

The kind of protest that would have been unthinkable possibly even a decade ago, one protestor put the feeling of the crowd into a few short sentences:

“As a Portuguese citizen, all of us are here today to show our indignation against the mistreatment of all animals”, she told SIC.

“A bullfight is not culture, it is torture. Sooner or later it will have to stop – and we have come out here to show that”.

As SIC’s reporter explained, the protest went “far beyond the issue with João Moura. It was against bullfighting in general”- and as such it was backed by politicians, animals associations, animal rescue entities like IRA and politicians attached to PAN – the People Animals Nature party that has done so much, in such a short space of time, to fight for laws to protect animals in Portugal.

PAN’s spokesperson Inês Sousa Real stressed that yesterday gave a “clear signal of disgust from civil society” not simply against bullfighting, but against “the impunity with which a homage can go ahead” for a man who is facing criminal charges for animal cruelty.

“It is incomprehensible that in the 21st century animals are still being tortured in an arena in the public space”, she added – stressing that despite João Moura facing charges that potentially carry a two year jail term, the case against him appears to have been ‘stalled’ – nothing has moved forwards for well over a year.

Cantinho de Milú, one of the shelters that took in some of the starving animals posted its “total indignation” at the all-too-public homage to João Moura earlier this week, featuring up to date photographs of some of the noble creatures that have managed to recover their form and are now much-loved pets in various homes, both here and abroad.

The shelter’s message was not only aimed at the “serious affront” of the homage – but the fact that João Moura’s negligence appears to have gone unpunished.

“This particular case revolts all those who helped and supported us”, says the organisation.

IRA – standing for ‘intervention and animal rescue’ – added that although press reports described ‘500 protestors’ yesterday, the reality was at least double that.

“They called us 500, but we handed out 1,000 wristbands in 20 minutes!”, says a Facebook post from the group today. “From north to south, the voices of indignation from the Portuguese against animal cruelty have been heard. The voices of thousands cannot be silenced”.

This was the first time the bullfighting fraternity will have witnessed such a massive protest against what they described as “a cultural tradition”, says IRA – and the first time those attending needed a police escort to get into the arena.

Time would seem finally to be running out for the Portuguese ‘tradition’ for bullfights.