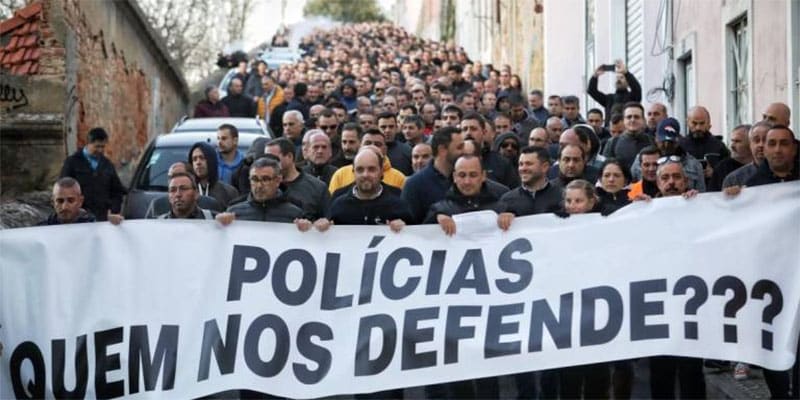 Peaceful, out of uniform (as judges ruled that to demonstrate in it would constitute illegal use) over 1000 police agents marched on Lisbon yesterday afternoon, chanting “police united will never be defeated”.

At issue – much like wrangles involving various arms of the public sector right now – is collective fury over the continued freezing of salaries and career progressions, and the lack of opportunity to negotiate solutions

Police forces have been existing on ‘undignified salaries’ explained union boss Armando Ferreira, “for which they give their health and sometimes their lives in the name of this country”.

“We have been 12 years without any kind of pay increase”, the president of Sinapol told reporters. “It’s something you simply do not see in any other profession”.

True, the nation’s teachers are demonstrating against nine years two months and four days of salary freezes, but nurses claim to have been left in the cold for over 13 years.

Mathematics aside, the 11 police syndicates which took part in yesterday’s march to the doors of the ministry of internal administration, are determined to force change.

Today (Thursday) they are returning to deliver a ‘memorandum’. Discussions are expected.

Meantime, PSP syndicate leader Peixoto Rodrigues is into his second full day of hunger strike in the gardens outside Belém Palace (click here).