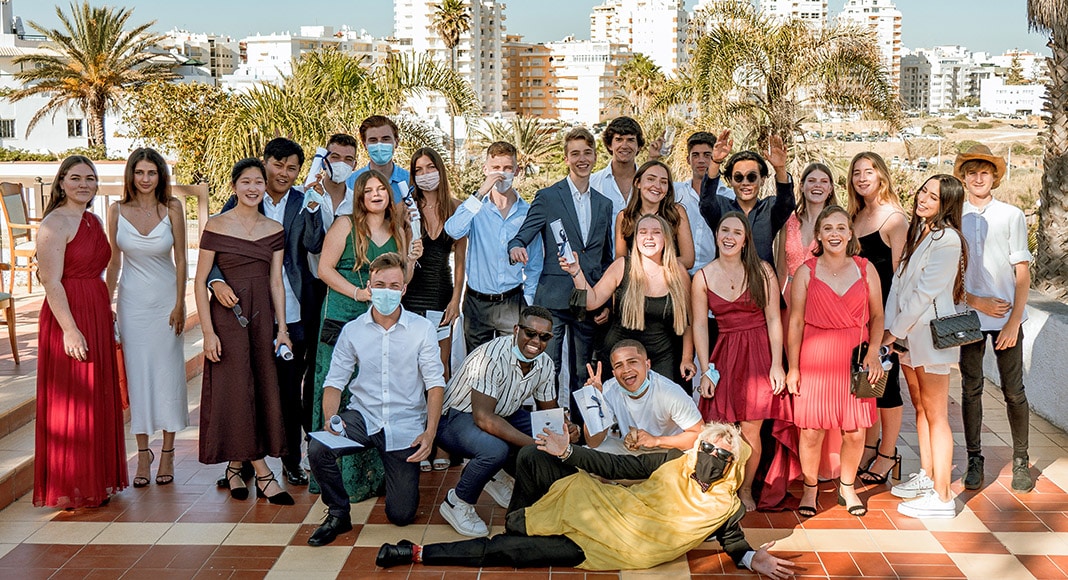 Nobel Algarve’s graduating Year 13 students have shown “dedication and determination” over the past school year and it has paid off, with students achieving impressive A-Level results.

The school has announced that 16% of its international section Year 13s attained A*s in their A-levels, with a further 38% going on to achieve A to A*.

Overall, Nobel Algarve had a 96% A Level pass rate. An achievement that is perhaps even more remarkable this year as, besides the ups and downs of the Covid-19 pandemic, unlike the UK, most students in international settings sat the usual external examinations.

As a result of their A-Level success, many of the leaving Year 13s are now heading to top European universities, such as Durham University and Portugal’s Católica.

Among this year’s outstanding achievers are Nobel Algarve Head Boy Noah Sá Fernandes, who attained A* in Business and Mathematics and an A in Geography. He is on his way to study International Economics and Finance at the renowned Bocconi University in Milan, Italy, one of Europe’s best business schools.

Noah’s proud parents said his exceptional achievements are a result of his hard work as well as Nobel Algarve’s “excellent preparation of students”.

Deputy Head Boy Adrien Nagel, winner of the Globeducate Student Roll of Honour, achieved four A*s in Further Maths, Chemistry, Physics and Mathematics. His four A* are a brilliant achievement and he is currently taking time to study his options for university next year.

Manuela Marcondes also achieved fantastic results with an A* in History and English Literature and an A in Portuguese. Described as a determined and dedicated student, she is now heading to Leeds University to study politics.

David Green, Head of Secondary, commented on their achievements, saying: “I am delighted with the number of students who have managed to gain places at their desired first choice universities.

“Their hard work and determination have paid off in these trying times. A big congratulations to all! We are very proud of you here at Nobel Algarve.

“The resilience with which both students and staff have faced the challenges thrown up over the past school year, coupled with a safe, secure and happy school environment, has proven to be a winning formula.”

These were external exams as, unlike in schools in the UK, students were obliged to sit exams as normal, often in the most challenging of circumstances.

Special mentions go to Year 11 IGCSE students Michael de Sousa for achieving nine Grade A* in his exams; to Sophia Klonis for seven Grade A*s, and to Ingo Fenyo Gallego for four Grade A*s and three Grade As, and Rafael Silva who achieved four A*s and four Grade As as well as an A-Level A grade in Portuguese.

Head of School Abigail Lewis added: “I am so proud of our young people and their achievements.

“With a mix of external examinations sat this summer and rigorously secured Teacher Assessed Grades, the results our students have achieved at Nobel Algarve are exceptional with 16% of all A-Level grades awarded the highest grade of A* and 50% of our AS results at the highest grade, A. “This enables our Year 13 students to progress to study at prestigious universities across Europe including London, Durham, Lisbon, Maastricht, Amsterdam and Geneva.”

She concluded: “Their success is a testament to our students, their parents and our dedicated staff and I wish our Year 13 students every success in the future as they leave Nobel Algarve ready to Shape the World.”