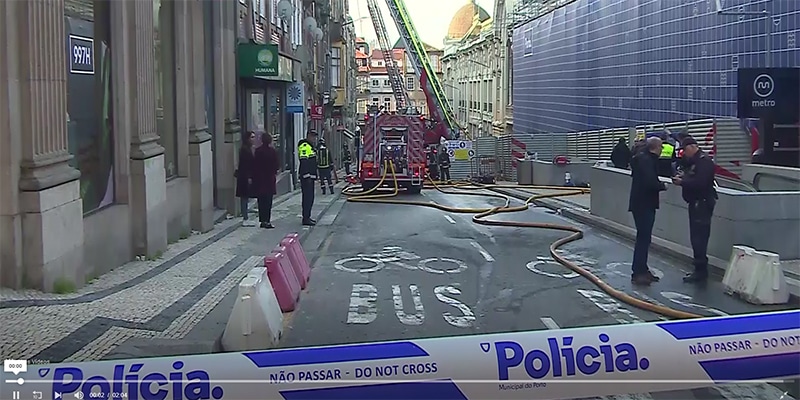 The fact that a man, accused of ordering an arson attack on a property in which one person died – and three members of the same family were left homeless – has managed to sell the property from his jail cell has elicited a storm of outrage.

Indeed the family of António Gonçalves, who died in the inferno despite staggering to a window to shout for help, says the law is all wrong.

It “should not permit a sale following a death” like this. “This is a case of organised crime”, a family member told reporters. “It was planned for a long time. It is proof that the mafia exists, and is among us”.

The terrible case of the burning down of an historic three-storey building in the centre of old Porto hit the headlines last year (click here), followed swiftly by texts suggesting the incident involved callous property speculation (click here).

Within months, Chinese ‘businessman’ Chenglong Li, along with two men he allegedly hired to carry out the attack, and a young Chinese student who helped with ‘translating’, had been arrested (click here).

But incarceration in preventive custody doesn’t appear to have called a halt to Chenglong Li’s business plans.

Explain reports, he managed to sell the property ‘from jail’ and even tried to send €600,000 home to China.

Fortunately, Millennium bank “communicated its suspicions over money laundering to the Public Ministry, and the bank transfers were suspended and money apprehended”, writes Expresso.

Chenglong Li’s wife, who appears to have tried to effect the money transfers after her husband gave her Power of Attorney, is also one of the accused in this case, which has yet to reach a courtroom.

Says Expresso, Chenglong Li purchased the building four years ago for 645,000 and sold it to a Portuguese business for €1.2 million.

According to Correio da Manhã, “the new owner of the building” said he had “nothing to say” to the paper.

The property however remains “padlocked” with all renovation works seemingly suspended.
This story began, explain all papers, after Chenglong Li purchased the property with ‘sitting tenants’ occupying the top floor. The tenants – a family who had lived there for over 50 years – were well within their rights to remain unless presented with a ‘deal’ that they agreed to.

So far, none of the stories written explain whether or not Chenglong Li came to Portugal on a ‘golden visa’ – a regime that has come under increasing fire for opening the doors to potential criminals (click here)