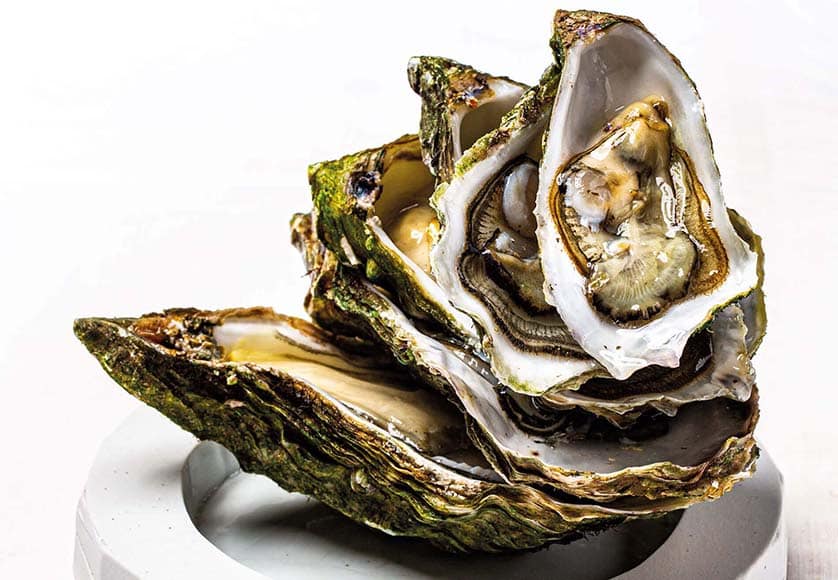 Rich in vitamin D, copper, zinc, and manganese, and believed to be a natural aphrodisiac, there is no doubt that oysters are good for our health.

Served by the dozen and washed down with fine wines in top restaurants around the world, these silver-coloured bivalves are increasingly being produced in Portugal.

Down in Vale da Lama, on the shore of Alvor’s beautiful lagoon, one of the Algarve’s most successful oyster producers is developing his business with a new catering service and a new slogan to go with it: “Happy Oysters”.

Why happy, we asked. “Because they don’t produce pearls, which means that they are not stressed,” explains Rui Ferreira, founder of Ostra Select. “Oysters produce pearls when they are exposed to an irritant [whether naturally or intentionally], which is not the case with our oysters. They are A-class oysters, meaning they don’t even need to be purified.” 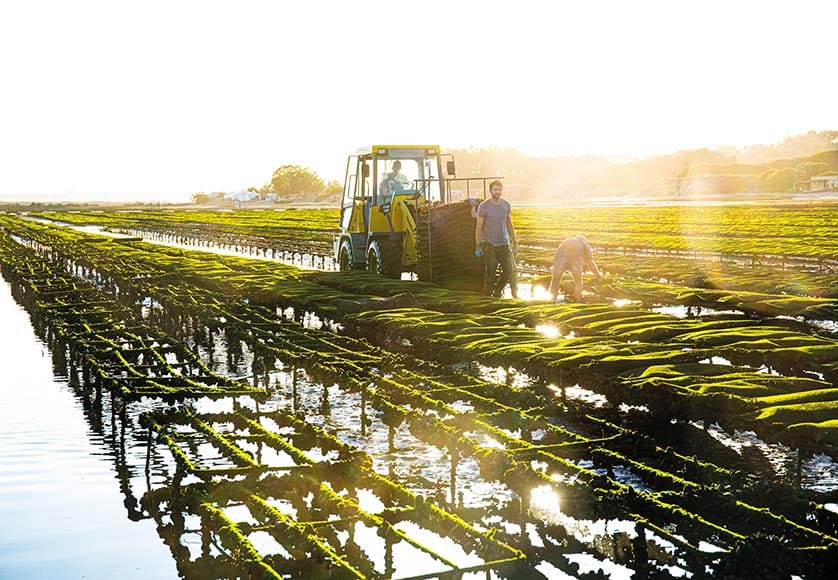 A pearl is actually an ulcer formed when an irritant gets into or is placed inside the shell. The oyster responds to this foreign body by coating it with nacre, also known as mother-of-pearl, which over time forms a pearl. But there are no pearl-producing oysters in Alvor.

Rui and his team farm these briny bivalves exclusively for their sweet and tender flesh. They are some of the lucky few to have received a licence to exploit part of the lagoon and be able to set up a proper operation on the shore, unlike some producers in the Ria Formosa, who do not have structures and have to work on a pier under a parasol. 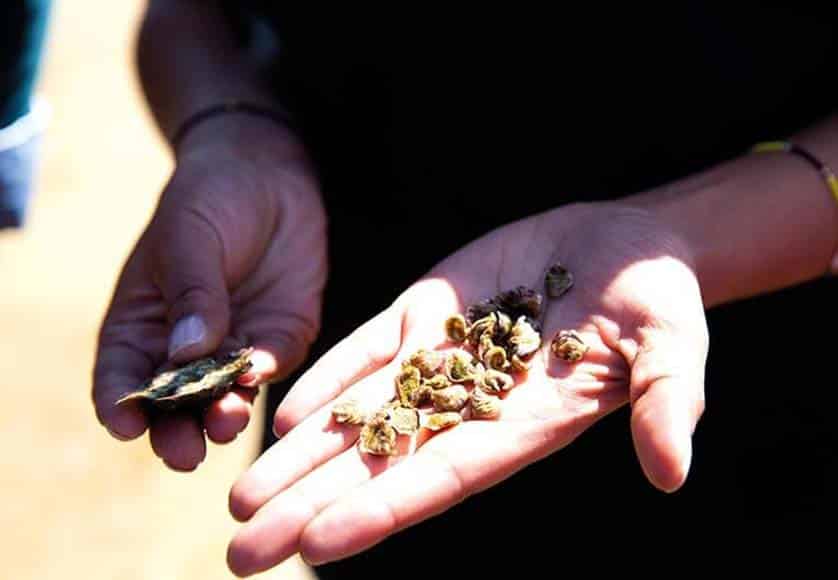 Rui first came to work in Vale da Lama in 1996 to help a friend with his clam production. “Oysters came four years later, following a trip to France where I learnt all about the trade,” he remembers. Today, Rui works with a producer in Arcachon – a seaside resort town in southwest France known for oyster harvesting – who supplies him with the seeds he needs for the 4.5 hectares he exploits in the Ria de Alvor. Here he produces around 200 tonnes of oysters per year (approximately 12 oysters per kilo), 80% of which are exported to France.

Alvor is an excellent location for oyster farming. The Atlantic’s tides and constant renewal of water provide the lagoon with rich phytoplankton for the bivalves to feed on. And the temperatures – particularly in winter – enable the oysters to grow uniformly throughout the year, unlike in cold regions where oysters go into dormancy when temperatures plummet. 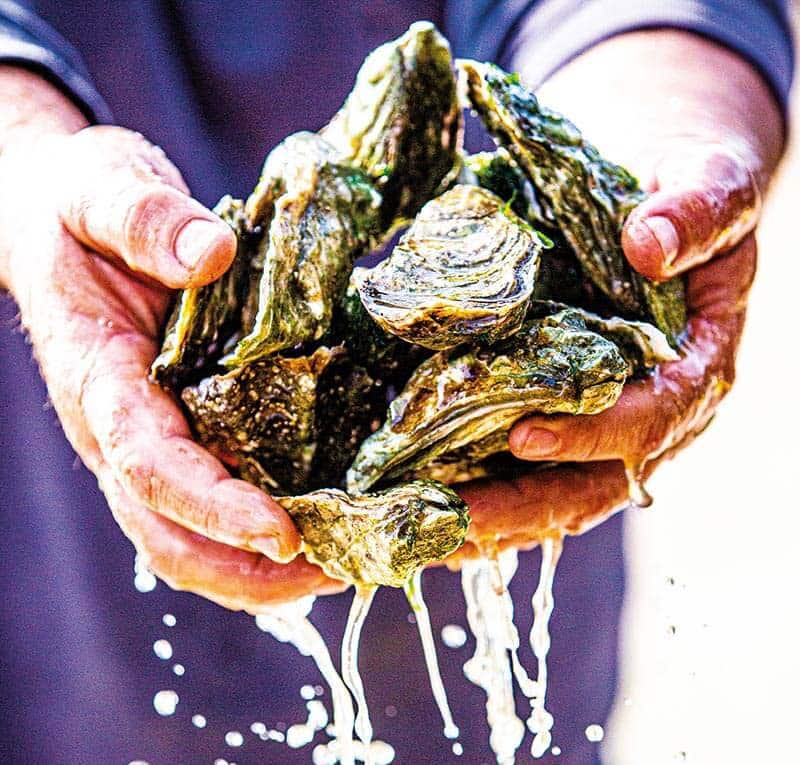 The production process starts in summer. “Oysters are born around July and August. Three weeks later, the larvae set and need seven to eight months in a hatchery”, before the seeds can be passed on to the producers. This is when Rui visits his partner in France, between March and April, to bring back baby oysters, which are only about two millimetres long, to place in his nursery.

Once the oyster seeds are large enough, they are put in mesh bags and placed on metal beds in the estuary. These beds keep the oysters off the ground so they can feed in the fresh water and avoid being smothered by sedimentation, whilst the bags keep crabs and other animals from eating the precious oysters. 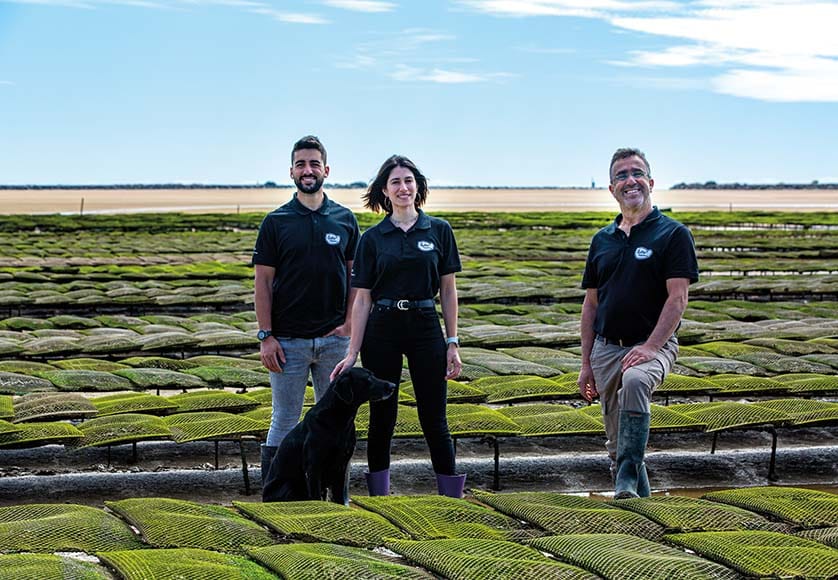 Known to be a great entrepreneur, Rui always comes up with new ideas and projects. Currently, he is experimenting with a production technique, already used in France and Australia, that results in smaller oysters with a more intense taste. He explains that this approach involves constantly rotating the bag in the water during the oyster’s final growth phase. This breaks the shell, which becomes stronger as it keeps repairing itself, and results in smaller oysters.

Small and round, Rui calls these little oysters his bonbons. “They are beautiful! They have a lot more taste. The concentration of their flavour just fills your whole mouth.” Being smaller and having a stronger shell also means that they are easier to shuck. 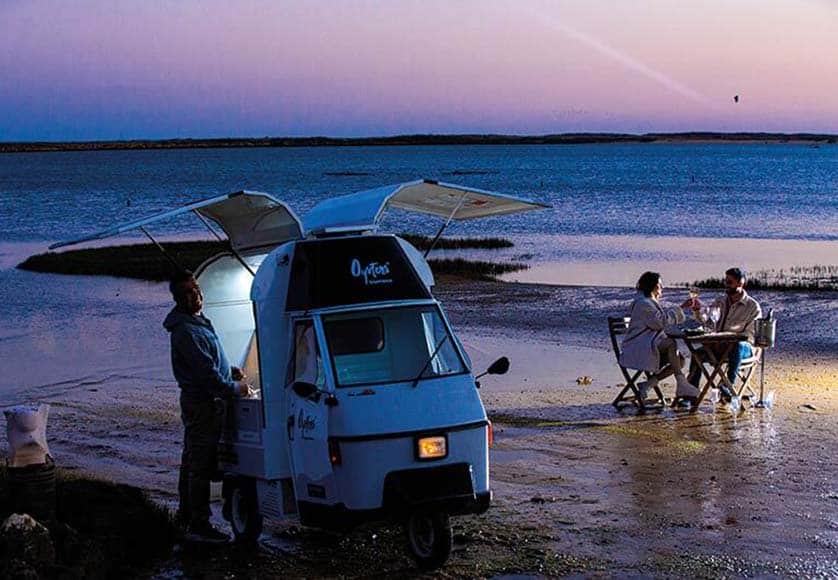 Ostra Select’s delicious morsels of the sea already have quite a reputation in Portugal. Rui and his son Miguel supply some of the country’s top chefs, such as Lisbon-based chef Ljubomir Stanisic (100 Maneiras) and Michelin-starred chefs Louis Anjos (Al Sud, near Lagos) and João Oliveira (Vista, Portimão), with whom they are currently working on developing a brand of gourmet canned oysters.

Father and son were also recently hired to open 700 oysters at a party at the very exclusive Costa Terra Golf & Ocean Club in Melides, Setúbal. 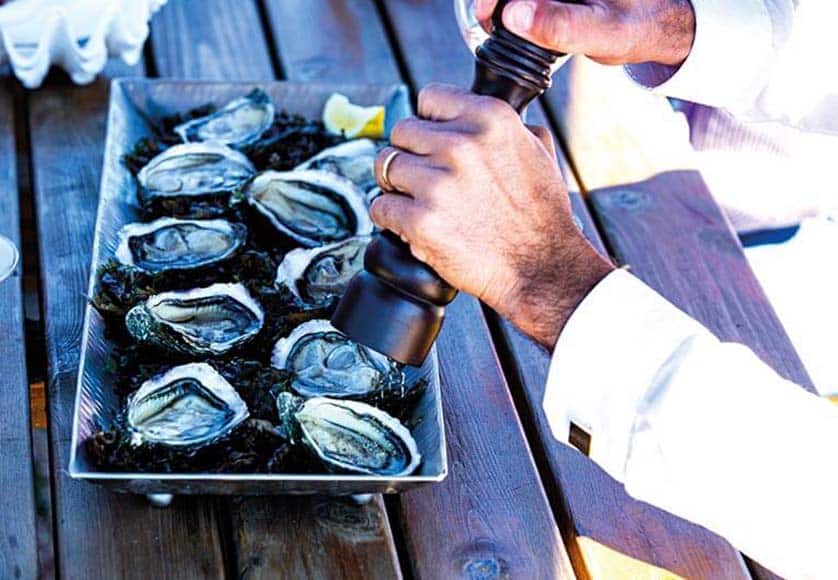 Although oysters are increasingly popular in high-end restaurants and at fancy parties, the Portuguese still consume very few of these delicacies. An article recently published in Público newspaper says that “whilst the French consume an average of 2kg of oysters a year, the Portuguese only eat 0.01kg”.

This motivated Rui and his team to create Oysters Experience, a new project designed to value oysters nationally and make them more accessible to Portuguese consumers by taking their services to both private and public events. 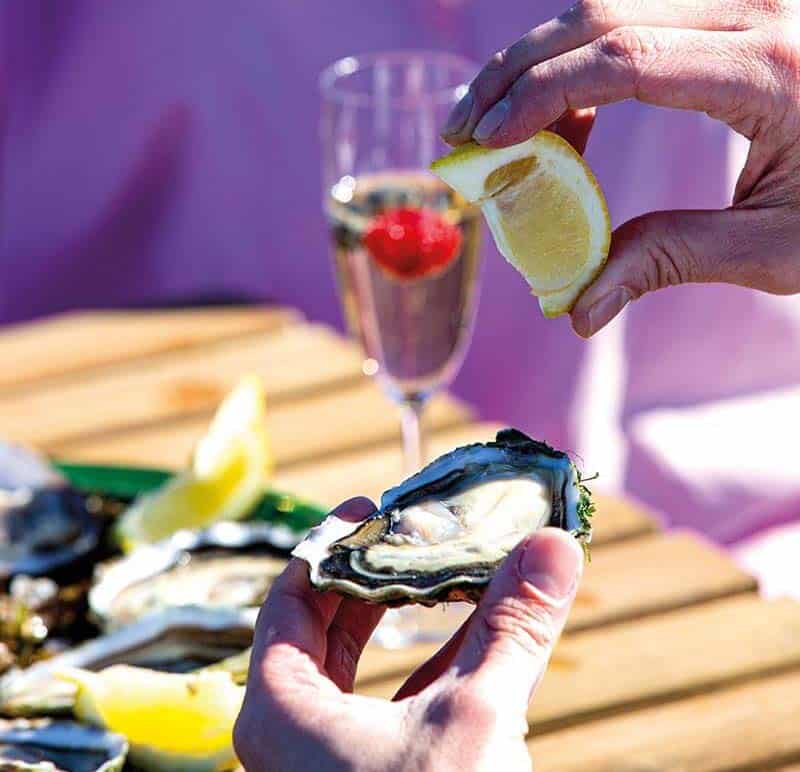 Following the opening of their oyster bar at Camilo restaurant (Ponta da Piedade, Lagos), they invested in a “food bike” designed to offer a full oyster catering service anywhere, anytime. The bike is a one-stop oyster shop. “We take everything with us, the oysters, the ice, all the condiments. The bike even has solar panels, giving it three hours of autonomy”, which is more than enough time to serve a few hundred oysters. “We charge a fixed price for the bike (€150), plus around €2.50 per oyster, depending on the quantity,” explains Rui. A deliciously fun way to entertain guests at any party.

Rui did not stop here. Wanting to reach as many people as possible, he took his idea one step further and invested in a food truck, which made its debut at the Lagos street food festival in July. Decorated with a black and white mesh pattern, representing the bags the oysters grow in, it is a larger version of the bike; a mobile catering concept designed to take oysters to fairs and festivals around the country. 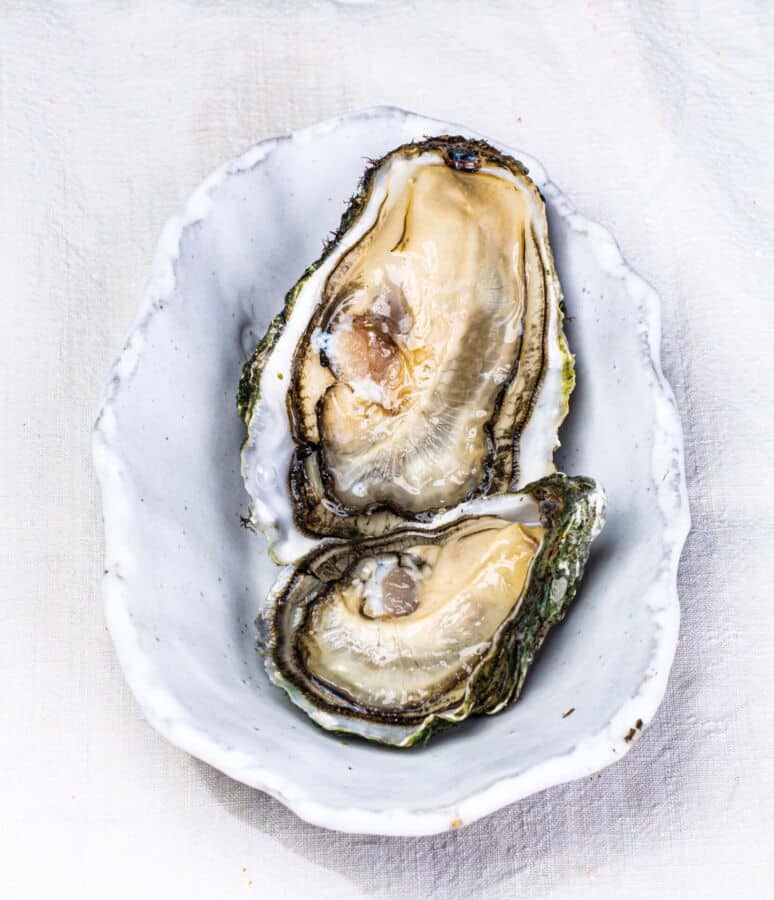 As for the foodie rule that dictates avoiding oysters in the months that do not contain the letter “R”, in other words, from May to August, it is no longer valid. These days, oyster farmers produce a species called triploid, which does not reproduce at this time of year, meaning that it does not become milky, nor does it empty itself after reproduction, becoming thin and bland. So, the good news is that not only are they good for you, but you can now eat them all year round. And thanks to Oysters Experience, you can have them shucked for you anytime, anywhere.