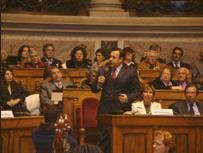 ORQUESTRA DO Algarve made history last Wednesday evening by being the first orchestra ever to perform at the Assembleia da República (Parliament building) in Lisbon.

MP and Social Democrat leader for the Algarve, José Mendes Bota, invited the orchestra to perform at the 400-year-old building and it has undoubtedly helped boost Orquestra do Algarve’s reputation on a national level.

Taking place in the Sala do Senado, the senate room, the audience included some well-known political faces. As well as the evening’s host, José Mendes Bota, the concert was attended by Jaime Gama, President of the Assembleia da República, João Bosco Mota Amaral, the previous President, António Pina, Civil Governor of the Faro district, Jovita Ladeira, Algarvean Socialist MP and former President of Faro Câmara, José Vitorino, among others, as well as media guests, including The Resident.

The setting, with the room’s tall imposing pillars, high ceiling and famous wooden benches forming a semi amphitheatre, appeared to be tailor-made for such an event and the orchestra certainly rose to the occasion.

Comprising 31 musicians of 17 different nationalities, the orchestra was led by its new conductor and artistic director, Cesário Costa, who took on the role just two months ago.

Adding to the uniqueness of the evening was the programme, with the orchestra premiering a piece of music composed by Portimão-born Cristovão Silva. Entitled As Quatro Estações: Primavera (The Four Seasons: Spring), the composer was present to hear its first performance and was clearly delighted at what he heard, coming down from the audience to shake the conductor’s hand at the end.

Next on the programme was a concerto for clarinet by Carl Maria von Weber. Soloist Fausto Corneo delivered an awe inspiring performance of the extremely difficult three-part piece.

Part two was no less impressive, with the orchestra performing Schubert’s Symphony No. 2 in B-Flat Major and, upon its conclusion, the audience were on their feet clapping.

The reaction to the historic concert was clearly very positive because as well as the rapturous applause and standing ovation, as the guests filed out of the room, many stopped to congratulate Mendes Bota on his idea and to comment on the exceptional standard of the performance. It seems this might even pave the way for further concerts to be organised in the future.

Prior to the concert, The Resident was given the opportunity of meeting João Albino da Silva, the President of the Board of the Associação Musical do Algarve, the association which founded Orquestra do Algarve in 2002, and the orchestra’s new artistic director and conductor, Césario Costa.

“Last year was a very good year for Orquestra do Algarve (OQ) because we played to larger audiences and to more young people, in particular,” the President told The Resident.

“Opera Giovanni was a huge success at Faro’s municipal theatre and was sold out and, the profile of the orchestra was also raised by its performance at the European Parliament in Brussels. The educational and family concerts were also very popular.”

In June 2006, the orchestra moved to its own headquarters at Horta das Figuras, adjoining the municipal theatre in Faro. The space, offered by Faro Câmara, provides facilities for administration, along with an excellent venue for daily practice sessions. “This has given us the conditions we need to work towards the future,” he said.

Da Silva was clearly very proud to be in Lisbon with the orchestra. “This is the first time any orchestra has been invited to play at Assembleia de República and this is a reflection of the work that OQ has been doing in the Algarve and in the rest of the country.”

Albino da Silva praised the work of the management team and of the new artistic director, who have been preparing this year’s programme. “The 2007 programme has been extremely well organised in advance and the content shows the capacity of the team. We have been working in conjunction with other artistic institutions both national and international, including orchestras and dance companies in London and Spain.”

The president also spoke of the orchestra’s role in the community and the support it receives. “Our mission is to contribute to the cultural development of the region and the resident community, as well as those who visit the Algarve. The orchestra contributes to the national and international prestige of the Algarve through its high artistic quality.”

The main associates of the orchestra are the regional câmaras, the University of the Algarve, the Algarve Tourism Board and the Ministry of Culture. “The orchestra has worked to achieve a noteworthy level of musical awareness among all levels of local society, particularly among young people. We have been strengthened by the support we receive from our associates, especially the câmaras and we are committed to public service. The musicians, conductors and board are very committed and work very hard, the câmaras regonise this.”

Aged just 36, Césario Costa was selected to fill the shoes of Alvaro Cassuto as artistic director of OQ. The post had been vacant since Cassuto left in 2005 and, in the interim period, the orchestra was led by Principal Conductor, Osvaldo Ferreira.

Costa has an impressive CV: he studied music and piano in Paris and concluded his degree and masters in orchestra direction at the music school of Würzburg.

After winning an international competition for young conductors in 1997, he was invited to be a guest conductor of all Portugal’s major orchestras and has performed at various high profile concert halls and taken part in numerous international festivals. He is a professor at Lisbon’s respected Universidade Católica Portuguesa, is preparing for a PhD at the Universidade Nova of Lisbon and is also the artistic director of the Promenade concerts of Porto’s Coliseu.

Talking about his new appointment, Costa told The Resident: “I have found a board, which has provided me with the conditions to develop the project and I have found a team here with agreat will to progress. My aim is bring the orchestra to the best possible standard.”

When asked if he was nervous about the performance at parliament, he said: “You get a few nerves before, but these go as soon as you are out there with the orchestra in front of the audience. It is important to enjoy it otherwise you cannot bring joy to the audience.”

The artistic director was clearly very excited about the year ahead and the diverse programme that has been planned. “The aim in 2007 is to consolidate the orchestra’s position in terms of the musical spectrum in Portugal and to project it further on an international level,” he said.

Among the highlights of the programme is the world premiere of Portuguese composer, Joly Braga Santos’ Cantares Gallegos, written for orchestra and soprano. OQ will be performing this at the Teatro Nacional D. Maria II, in Lisbon, in February with well-known Spanish singer, Maria Orán, to whom this was especially dedicated by the composer in 1983.

In terms of concerts abroad, OQ will be performing in Vienna in March, in the Sendesaal of RadioKulturhaus, with pianists Mário Laginha and Bernardo Sassetti. Then, later in 2007, there will be concerts in Spain, in the cities of Cáceres and Mérida and, in 2008, a concert is planned in London, at the Queen Elizabeth Hall.

Other highlights this year include a series of Beethoven concerts at Faro municipal theatre featuring various top national pianists. Also at this theatre will be a further series of promenade concerts that are open to the whole family.

In Lagoa, in May, there will be several concerts broadcast live on national radio, RDP, which will be dedicated to Portuguese music from the 18th, 19th and 20th centuries. Other noteworthy events on the programme include open air performances in June and July throughout the Algarve of a Mozart opera, an open air opera and fashion gala in Loulé. In addition, open air summer concerts will be taking place in Portimão and Vale do Lobo, down by the riverfront and on the golf course respectively.

For more details about OQ and for the full programme of concerts for 2007, visit www.orquestradoalgarve.com where there is an English language option for information.