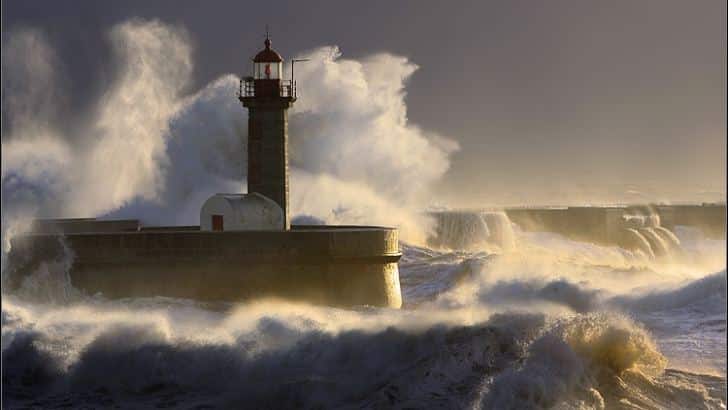 All Portugal’s mainland districts are on orange alert for Sunday due to forecasts of strong winds and rain, snowfall and rough seas with waves reaching up to 10 metres.

The weather depression, dubbed storm Ana by Portugal’s forecasting authority in collaboration with authorities in Spain and France, is forming over Ireland today (Saturday), and expected to move southeast rapidly.

Strong rain is expected throughout the country, along with winds of up to 120 km/hr in the north and centre.

Snow, too, is forecast for the Terras Altas region.

The bad weather will continue into Monday, though with less severity, and sunshine should be returning to southern districts by Tuesday.

Civil Protection authorities have already issued warnings to the areas likely to be worst affected, encouraging “defensive driving”, special care with ‘loose structures’ like scaffolding and billboards, and advising people to stay away from the sea and not to practice any kind of watersports.

The latest Civil Protection alerts cover all districts, with advice for the Algarve suggesting winds will start at around 70 km/h, gradually increasing to 100 km/h and even reaching 120 km/h on highground.

Waves of 5-6 metres are forecast, although they could reach 10 metres.

This is the first time that a storm hitting Portugal has taken a name, explains Público. This ‘baptism of strong storms” is the result of a new agreement, signed on December 1, between IPMA, Aemet (Spain) and Méteo-France (France).

From now on, whenever the three countries activate an orange or red alert (the two highest levels of weather warnings), the weather fronts will be given names.