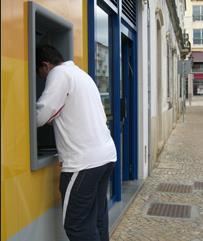 AN ONLINE petition protesting against the banking sector’s plans to introduce ATM charges across Portugal has received 229,655 signatures since being started in 2007.

Charging customers for the service is a subject that has been discussed since 1994, when the national banks proposed charging a commission on cash withdrawals from ATM machines. Consumers reacted negatively and the issue was dropped.

The matter returned to the public spotlight in 2001, with bankers defending publicly the” justice” of a small commission.

Such charges have been in use in the United States and several European countries for many years.

Following the implementation of the Single Euro Payments Area (SEPA) system, started this year and expected to run across all Euro countries by 2010, bankers are now saying that a cash withdrawal commission is being imposed by the EU.

The SEPA system was created by banking organisations and is supported by the European Commission.

The purpose, it is said, is to simplify consumers’ lives by allowing  users to do all their banking operations, including ones abroad, through one bank account only and, theoretically, to reduce their banking expenses.

The issue of the ATM commission has been discussed in the Portuguese media at length and led the Portuguese Communist Party to present a law proposal in Parliament in July 2007, asking for the government to prohibit the banking sector from charging consumers for withdrawing money.

For more information, visit http://www.petitiononline.com/mod_perl/signed.cgi?bancatms. The website is in Portuguese and English.