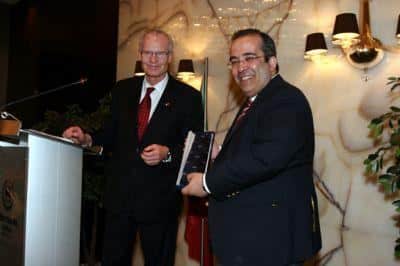 The PSD front-running candidate for the European parliamentary elections has accused the government of wanting to nationalise banks and private companies in Portugal.

Addressing members of the American Club in Lisbon on Thursday, Paulo Rangel said that José Sócrates’ PS government was “nationalising everything” instead of letting the economy “function and find its own level”.

“José Sócrates is against private initiative”, said Paulo Rangel and suggested that the Prime Minister would soon close down private schools and hospitals and put an end to private enterprise in Portugal.

“Sócrates, who so often has talked about the importance of private investment and companies, is now the same person who is carrying out the largest attack on private initiative in Portugal,” he said.

Paulo Rangel said that looking in the future, historians and political observers would recognise three major factors or events that had marked the end of the 20th century and beginning of the 21st century: the Fall of the Berlin Wall, the September 11th terrorist attacks and the current financial crisis – all of which were determining the kind of world, society and political order that was emerging.

These three moments marked “a period of change” and a “rupture with the old political order” in which the world was no longer marked by independent states but rather by “entities” such as the European Union, Al Qaeda, NATO and global companies.

“We are seeing profound changes to traditional political and public organisations which don’t have the ability to deal with globalisation and shifts in power,” he said.

The world of single states trying to defend their own interests “had vanished” in a global world of high-tech telecommunications, internet, cable and satellite TV which was leading inexorably to what he called “deterritorialisation” whereby decisions were now taken by blocs and groups of states such as the USA, EU and NATO.

Instead, he predicted the “death of the state” or at least the “weakness of the state” because of globalisation, internationalisation and trans-nationalism.

“The state is now being dominated by entities outside of itself and, at the same time, is being undermined from within by the forces of regionalisation,” he said referring to what was happening in Spain and Portugal.

He talked about the end of a state-controlled mass society and the creation of a public that was technical and enmeshed in virtual worlds from Facebook and Twitter to Blogs, MSN and E-mail.