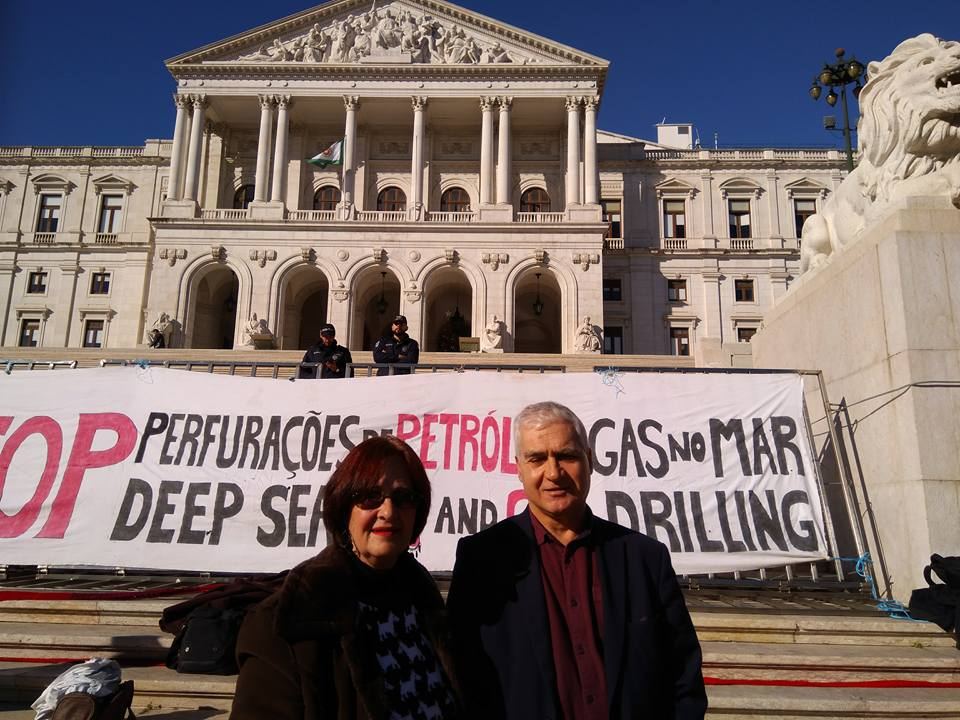 They came, they saw and sadly for the rest of us, they did not conquer.

The David v. Goliath fight to save Portugal from imminent gas and oil drilling got another kick in the teeth from Lisbon today, where the ruling Socialist party voted against motions from allies Bloco de Esquerda and PAN to scrap all concessions threatening national territory, both on and offshore.

Backed by PCP communists and the right wing parties that signed oil and gas contracts at the last minute of the PSD/CDS-PP coalition in 2015, the ‘defeat’ at least proves one thing, says Bloco de Esquerda MP João Vasconcelos: now we all know who wants the country in the hands of the oil lobbies.

Writing on Facebook after posing for photographs with anti-oil champion Laurinda Seabra, Vasconcelos wrote the caption to this story: “With Laurinda Seabra, the great fighter of ASMAA against exploration and production of hydrocarbons in the Algarve, while inside parliament the PS, PSD, CDS and PCP vetoed a proposal by Bloco de Esquerda and PAN to end with the concessions given to oil companies. Extraordinary! The PS, PSD, CDS and PCP are in favour of gas and oil drilling. Now we all know”

And now the multitude of civic organisations and NGOs that asked the government “what now?” earlier this week (click here), have their answer: “We are not listening to you”.

For updates to this story, reaction from the activists who have been waging an apparently impossible struggle, watch this space in January. The fight is not over yet, and there are many unanswered questions, not least how the government is going to respond to the resounding veto over oil exploration given by all the municipalities affected in the Algarve/ Alentejo basin, and whether the secretary of state is prepared to give oil companies the extension they may need on their contracts.

It’s the only good news coming from today’s efforts by activists, but it is not even that good: exploratory drilling by GALP/ ENI which hoped to start work on its bloc of concessions affecting several Algarve and Alentejan councils has been suspended pending the results of environmental impact assessment.

The resolution, put forward by PCP communists saw positive votes by all left-wing parties, with abstentions coming from “the majority of the PS, PSD and CDS” MPs.

The problem, say activists, is that environmental impact assessments are invariably ‘smokescreens’ – paid for by the very companies that mean to do the work and thus unlikely to flag any reasons for their plans not to be allowed to go ahead.

In this particular case things are possibly even ‘worse’: Laurinda Seabra says she understands that the EIA has already been done. It simply hasn’t been published yet.

In other words, GALP/ ENI’s plan to drill off the coast of Aljezur this spring may still be bang on track.