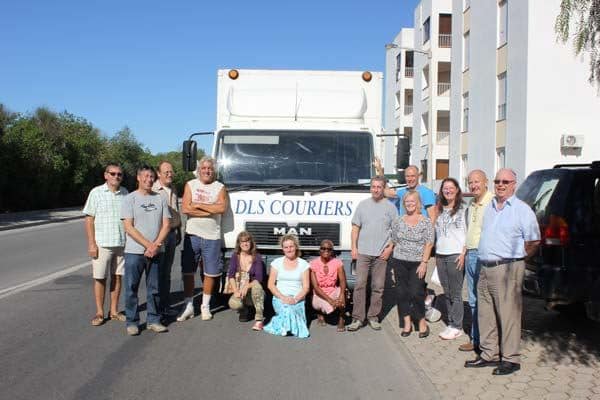 Do I need to say just how amazing the people of Portugal are? This year another record was broken when no less than 1,924 shoeboxes, full of small gifts, have been sent to children living in poor situations and who would possibly not have a present at Christmas. These simple gifts make a world of difference. Please read on to see just how big that difference can be…

This week I had a letter from Jill Kinsey, who runs two children’s centres in Lesotho (Africa).

Jill wrote telling me the horrendous story of a little boy who had been brought to the centre at Pulane. His name was Semphiwe. He did not know his age, his birthday, if he had parents or where he lived.

Jill thought he looked about 8-9 years old, but could be older due to malnutrition. He was brought to the centre on horseback by a village councillor. He was afraid and angry. He did not want to be where there were no cows. They had possibly been his only source of food for most of his life and it is not that unusual for shepherd boys to suckle cows as they graze in the hillside.

The police are trying to find who is responsible for this boy. In the meantime, they decided to bring him to the children’s centre.

His full story is too long to tell but, in a nutshell, during his short life he has been abandoned; he has been beaten so severely that the scars and lumps on his head will never go away; he has been thrown to dogs as food but, fortunately, the dogs were not hungry that day.

He is bewildered, frightened and aggressive. He was offered a cookie. He broke off a very small piece and hid the rest under his well-worn blanket in case that was the last food he had that day.

He was offered shoes. “I don’t want shoes! I want to die!” He sits and weeps and the tears run down his little black and dusty face. “I want a cow,” Semphiwe cries. Jill explains that at Pulane they have sheep, goats, pigs, chickens and rabbits, but no cows!

Semphiwe – pronounced Sem-pee-wee – is taken to get some clothing from the store at Pulane. He is given a beautiful pair of new green shoes, three pairs of trousers, T-shirts, a jacket and underwear. He does not smile and continues to look sad.

Jill suddenly remembers that there are some shoeboxes left over from last Christmas. She picks up the first one that comes to hand and gives it to Semphiwe. It was still all taped up. Semphiwe’s eyes widen. “Is this for me?” he asks. Together they pull off the sticky tape and open the box. On the very top, the first two items visible are large plastic cows! Isn’t that amazing? “For the first time, we see Semphiwe smile,” writes Jill.

That is the difference … I need say no more except a huge thank you to everyone who has supported Operation Christmas Child this year. This includes the many sponsors, helpers and organisers, and the total generosity of DLS Couriers, who are taking the boxes back to the UK on the first leg of their journey, and to Transdirect LDA, who transported boxes down from Lisbon and Cascais, all without charge. Thank you so much.

Gill Rhodes is a registered volunteer for Samaritan’s Purse.