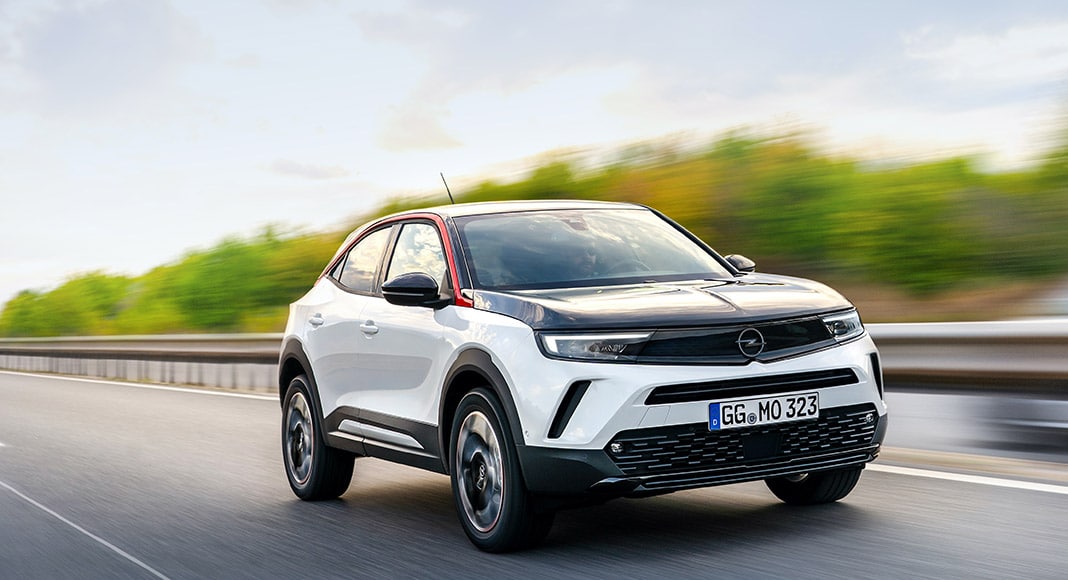 The new Opel Mokka is precisely that: all new. And it looks good. Opel needed a car like this.

The Opel Mokka. Outrageous looks, aren’t they? I don’t see anybody buying the new Opel Mokka because of anything other than those looks, actually. Normal considerations in the traditional car-buying process just don’t seem to matter when a car looks this bold, this fresh and this different from everything else.

Coupé proportions, a very dynamic profile and Opel’s new corporate face, called Vizor, based on the famous Manta from the seventies and eighties, are here to distinguish the German brand from the rest and bring the spotlight back to a constructor often, and unfairly, forgotten outside its native Germany and as Vauxhall in the UK.

Now, you may think this total reinvention of what the Mokka is comes on the back of a poor commercial result from its predecessor. But you’d be wrong. The first Mokka sold half a million units in its lifecycle and was a surprise hit for Opel. Although it was a bit bulky and showing weird proportions, it lured a lot of customers through its ruggedness and wide interior space.

So, why this dramatic change for the second generation? Well, because Opel needs not only a more coherent but also a more appealing aesthetic language in order to better establish the brand in a time when so much is moving forward in the industry.

Also, do not forget Opel is now part of the Stellantis Group, which includes Peugeot, Citroën, DS, Alfa Romeo, Abarth, Lancia, Fiat, Dodge, Chrysler, Jeep, Ram and Maserati. A very clear identity is absolutely pivotal for each and every brand, so it doesn’t put itself in a position where it can be discarded.

Hence the importance of producing cars that people notice – and not only those who will buy the actual car. The Mokka is a good example: you certainly cannot miss it on the road.

This is still a big gamble for Opel. The new car is so far removed from the old one they cannot be sure how clients of the original will respond to the new model. Moreover, Opel is not a brand known for its stylistic prowess, so new clients may also mean the loss of old ones. But hey, I, for one, must commend them for this bold attitude. Good design is always an admirable choice.

The new Mokka is up to 120kg lighter than the original, 124mm shorter and 130mm lower, but 10mm wider with a 2mm increase in-between axles. It sits on the same CMP platform as the Corsa and comes with a range of petrol, diesel and electric versions. Being very closely related to the DS 3 Crossback as well, they both share a production line at Poissy, in France.

I drove the most powerful petrol model, a 1.2 litre turbocharged three-cylinder with 130 horsepower from the Stellantis roster. It came with an eight-speed automatic transmission sending power to the front wheels. A manual gearbox is also available.

Driving the Mokka, the first thing that strikes you is the fact that a lot of people are staring at you. Suddenly you realise Opel’s goal of being noticed has hit the mark. The novelty factor is strong, even in a segment where cars such as the Nissan Juke or Peugeot 2008 have pushed design further than other parts of the market.

The driving position is very good, lower than the norm for a small SUV, something I really liked. The Mokka is not a sporty car, nor does it intend to be. It’s the type of thing people look for these days: refined enough, efficient, easy to drive in any circumstance, with a high-driving position and an array of gadgets that are as, or more important than, pretty much everything else that makes it a car.

It rides well without being as comfortable as the DS 3 Crossback or the Peugeot 2008 and always feels nimble around town without compromising its motorway ability. The steering is pretty numb and quite artificial – sadly a result of fewer and fewer people caring about that in the first place. As for fuel economy, expect a combined average of around 7 litres, less so if you do a lot of motorway miles.

I think the Peugeot 2008 is the more appealing driving machine, but the Opel has those looks going for it and it just feels more different, more of an appealing left-field choice. The traditionally conservative German outfit even came up with new colours like Power Red, Mamba Green and Voltaic Blue. They all look good.

White does too, especially with the black bonnet and red accents on the sides.

I still have not mentioned the cabin, but it is another good surprise in terms of layout and infotainment. Opel’s Pure Panel twin screen arrangement works very well, whereas materials are what you expect, with a tendency for black gloss finish that looks good until a less careful cleaning job gives it a few too many scratches. I didn’t particularly like the look of the seats, but I liked how they felt and, after two hours driving non-stop, I felt as fresh stepping out as I had done stepping in.

‘My’ car was an Ultimate trim version, meaning it starts at €30,455, but you can get an entry-line, manual gearbox Mokka with the same engine but 30 horsepower less for a whisker under €21,000. That’s value.

I will try the pure electric Mokka soon. But this one I definitely liked. Especially the looks. 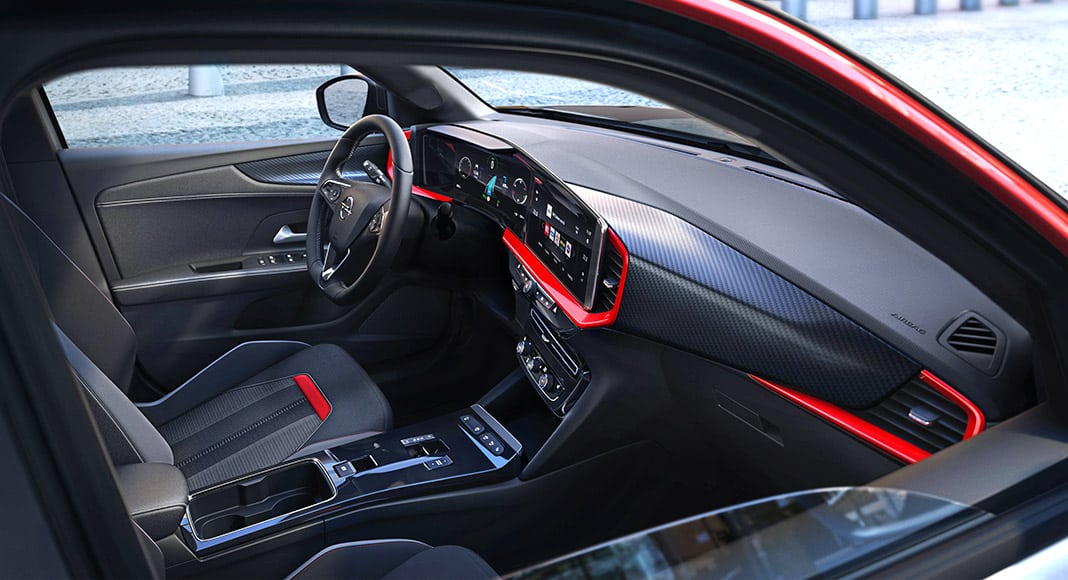 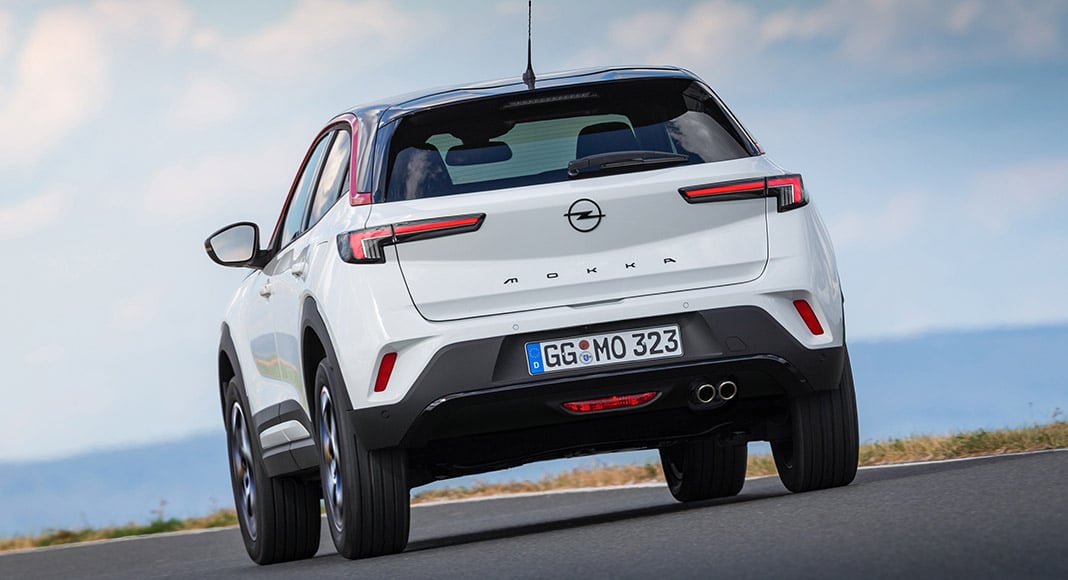