Portugal Resident
Home Original One win away from glory! 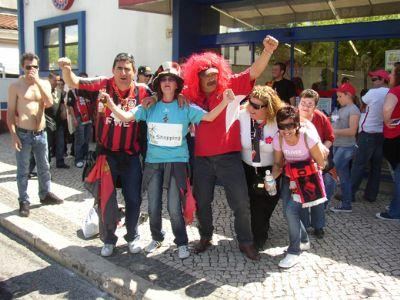 SC Olhanense took a massive step towards promotion when they defeated their closest rivals Santa Clara (Azores) at the José Arcanjo Stadium, Olhão on Sunday.

With only goal difference separating the top two teams, this was a vital match. A near capacity crowd of 6,500 was in festive mood as the match was beamed live on TV throughout Portugal.

One of these teams is certain to be promoted to the Premier Division to join the big guns. With only two games to go, Olhanense need just three points to guarantee a return to the top flight, which they last played in 34 years ago.

The new club mascot Moss the Stork was unveiled before the game, much to the delight of the numerous school children who had been given free entry by the club for this special occasion.

Both teams started the game nervously and Olhanense were keeping a tight reign defensively, particularly after last week’s heavy defeat at Leiria. With Ukra under constant attention from two opponents and not fully fit, it was left to Djalmir and Toy to forage up front in the hope of picking up the odd morsel.

Passes went astray as neither side settled and home keeper Bruno Veríssimo hardly touched the ball in the first half. Ukra was replaced by Messi at the interval and he and Castro began to make headway against a resolute Santa Clara defence.

Midway through the second period, referee Pedro Proença flourished the yellow card five times in five minutes, yet this was in no way a dirty game. It was to prove costly for the home side when Bruno Mestre was shown a second yellow card, in the 75th minute, for an innocuous challenge.

Down to 10 men, Olhanense took off Guga and brought on Rui Baião to bolster the defence.

With only minutes remaining, a long ball downfield was chased into the box by Djalmir, who reached it a fraction of a second before Santa Clara keeper João Botelho and the referee had no hesitation in awarding a penalty.

The tension could be felt around the ground and many in the crowd couldn’t bear to watch as Djalmir, who had blazed his last penalty over the bar, stepped up to make no mistake this time and bring his tally to 20 goals for the season. 1-0 and the fans were delirious – the roar must have been heard along the whole length of the Algarve!

There was still time for the visitors to surge forward in the hope of grabbing an equaliser, but Bruno Veríssimo saved the day with a flying save from a free-kick.

Another big day on Sunday

With U. Leiria surprisingly losing 2-1 at lowly Oliverense, the league leaders are three points clear of Santa Clara and four points ahead of Leiria. A win at Gondomar on Sunday would ensure promotion and could be enough to win the title.

Gondomar, second to bottom and threatened with relegation, had a good 1-0 win at D. Aves and are fighting for their survival at this level so will be no pushover. The final game of the season is at home to Gil Vicente on Sunday, May 24.