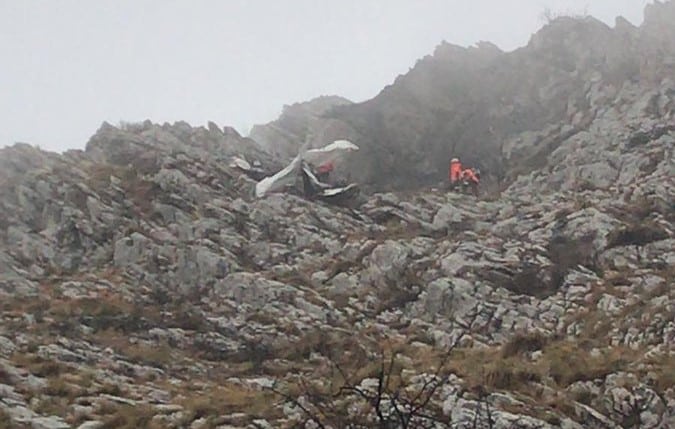 The identities of two Britons killed last Wednesday when their light plane crashed after taking off from an airport in Cascais have been confirmed.

One was Simon Moores, 62, a former “tech ambassador to the British government”, a keen aviator, local councillor and aerial photographer, and the other was David Hockings, 67, the boss of an aircraft maintenance company.

The men were travelling from Tires airport in Hockings’ four-seater Piper Arrow III bound for Kent, in the UK.

Said the BBC, they were due to make a stopover in northern Spain, and it was here that something caused them to crash into Mount Hernio.

Conditions were extremely foggy and, according to a report in the Daily Mail “the aircraft might have had a fault in its altitude equipment meaning the pilot might not have realised how low the plane was”.

As it was Moores – who was flying the plane – changed the flight plan during the journey, opting to refuel in San Sebastian as opposed to the scheduled stop in Biarritz.

Investigations are ongoing in Spain to try and establish exactly what went wrong.

The Mail alluded to Moores having been the brother-in-law to Bake Off chef Paul Hollywood, who recently split from Moores’ sister after a 19-year-marriage.

Friends reacting to the news over social media stressed the father-of-two “deserves to be reported as more than the former brother-in-law of celeb”.

Two bodies have been discovered following the crash in Spanish mountains of a light plane that left Tires aerodrome, near Cascais, early yesterday morning.

The dead have been described as “foreigners, possibly British”.

Their Piper PA-28 Cherokee set off for Hondarribia aerodrome, San Sebastian, at 8.22 am on Wednesday, crashing into Mount Ernio – just over 40 kms from the flight destination – “at around 2pm”.

Say reports, “contact was lost with the plane at about 13.45 Lisbon time” – and a local “heard an explosion and raised the alarm” shortly afterwards.

Conditions however were densely foggy and the wreckage and first body were not recovered until almost two hours later.

A search for the second body was called off as darkness fell. The body was finally located early this morning, writes Observador which has been in contact with Tires aerodrome in the hope to confirm the victims’ nationalities.

A source at Tires however has said the aerodrome “knows nothing of the disaster”.

Lusa meantime has confirmed that the plane was registered in Britain and that the occupants were “foreign, possibly British”.

Mount Ernio is one of the most visited mountains in the Basque country, with its peak reaching 1,200 metres.

For now, it is unclear what caused this tragedy. An investigation has been mounted.