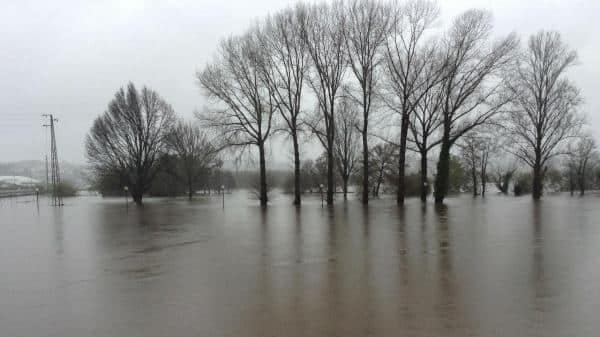 A 61-year-old cyclist was killed on Saturday after falling into roaring floodwaters of the Vouga River as the country was plunged into yellow weather alerts from north to south.

Today (Monday) as the alerts are slowly scaling back, the country is counting the cost of a weekend of storms and rapidly plunging temperatures.

Civil protection services have been called out to “hundreds of floods”, writes national tabloid Correio da Manhã, while nine ports have been closed, railway services interrupted and trees have fallen.

The worst of the damage has been in the north and centre of the country.

In Coimbra, the pretty Santa Clara-a-Velha monastery was once again filled with water with “eels and other fishes” wriggling round its cloisters as the Mondego river burst its banks for a second time this year.

Elsewhere, the streets of Águeda and other low-lying communities were flooded, while high winds reaching 100 km/h have caused damages everywhere and call-outs to people stranded in places like Forte de São Miguel, Nazaré.

In Régua, a house collapsed from the force of heavy rains and general battering – and all over the north rescue services complained that drivers were not taking weather alerts seriously, and going out needlessly, tempting all kinds of accidents.

“They wanted to take advantage of Valentine’s Day,” fire station commander João Almeida told CM, and as a result the calls for help spiralled.

In Serra da Estrela, where temperatures are expected to plunge today to -9ºC, access roads were closed throughout Sunday due to heavy snowfalls.

Snow too has been reported on the Serra de São Mamede.

“Elevated damages” have been recorded in numerous boroughs, one of which, Santa Marta de Penaguião, estimates the clean-up operation will cost well over €500,000.

But, for now, only one death appears to have been caused: that of Aveiro ironmonger Manuel Artur Couteiro, a father-of-two, whose body was recovered on Sunday morning.