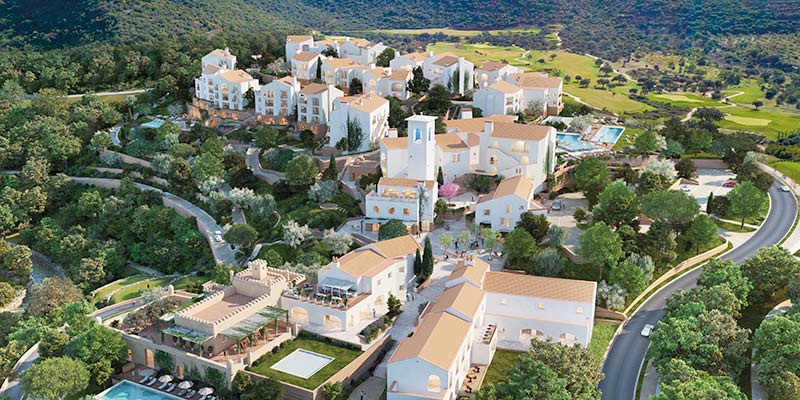 Ombria Resort’s management has announced that it has selected northern Portuguese constructor Gabriel Couto for the construction of its five-star Viceroy Hotel and Viceroy Residences in the forested hills of Loulé.

In a statement to the press, Ombria Resort highlights that Gabriel Couto was selected because it has been performing public and private construction works for over a half-century. The constructor’s portfolio encompasses projects such as five-star Hotel Vila Galé Sintra, five-star Hotel Torel Avantgarde, MAR Shopping Algarve and even Faro Hospital.

“It is a huge honour to be a part of the development and construction of Ombria Resort, an emblematic tourist development which will undoubtedly be an icon of excellence for the tourism and residential sectors in all of Portugal and particularly in the Algarve,” said Daniel Costa, commercial director at Gabriel Couto.

He said that the fact that Gabriel Couto was selected is an “unequivocal sign of the confidence Ombria Resort has in the technical abilities, experience and skills of Gabriel Couto when it comes to the construction of big hotel/residential projects”.

Costa added that the construction company was also “very proud” to have been selected, especially in the same year that it is celebrating its 70th anniversary.

Scheduled to be completed in early 2022, the Viceroy Hotel at Ombria Resort will feature 76 luxury guest rooms and suites in addition to the Viceroy Residences, which will include 65 one- and two-bedroom apartments. Both will be managed by five-star US-based operator Viceroy Hotels & Resorts.

Extensive facilities and services will include a spa, healthcare and fitness facilities, several restaurants and bars, a kids zone, astronomical observatory, a conference centre and indoor and outdoor swimming pools.

The owner and developer of Ombria Resort – which also includes an 18-hole golf course that is already technically ready but will only open for play once the clubhouse opens as well – is the family-owned Finnish private equity fund and real estate developer Pontos Group.

It operates in Finland, the Baltic States and Portugal. Founder Ilpo Kokkila is also the founder of one of Finland’s largest construction companies, SRV.

The first phase of Ombria Resort represents an initial investment of some €100 million, although the total amount is estimated to reach the €260 million mark.

Other residential projects
The Ombria Resort will also feature the Alcedo Villas site, comprising 12 individual plots from 1,735sqm to 3,324sqm for private turnkey villas. Designed by Portuguese studio Promontorio Architects with large private pool, garage and fully landscaped gardens, these villas will be built to order, enabling buyers to personalise certain aspects of finishing. Prices range from €2,550,000 for a three-bedroom villa with a built area of 481sqm and €3,950,000 for a seven-bedroom villa with a built area of 747sqm. The show villa will be ready by the end of 2020.

The next residential units to be released will be at Oriole Village, planned to start construction in 2020 and comprising 83 units, including spacious apartments, townhouses and villas with between one to four bedrooms.