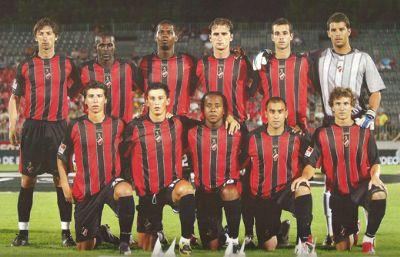 The day many supporters thought would never come finally arrived as SC Olhanense started their first campaign in the top flight of Portuguese football for 34 years.

Opponents Naval had been beaten 2-0 by Olhanense in last season’s Carlsberg League Cup but whilst Naval had only a few additions to their squad, the visitors took the field with seven new faces.

Both sides started lively but the first touch often let players down. Jorge Costa handed a debut to under-21 international goalkeeper Hugo Ventura in preference to the experienced Bruno Verissimo.

Ventura had a solid game and despite dropping a high cross late in the game, he acquitted himself well. The new back four of Miguel Garcia, Anselmo, Sandro and Carlos Fernandes was rarely troubled in an area where the team were, last season, rather suspect.

Former Sporting star Miguel Garcia, sidelined for the past two seasons through injury, is a quality player who gives the team width whilst Castro, Rui Baião and Ukra were industrious in midfield.

Referee Paulo Costa flourished the yellow card seven times in what was a very clean game and one wonders how long it will be before the game becomes a non-contact sport!

With injuries, suspensions and international clearance awaited on Greg Nwokolo and Gomis, the manager had few attacking options.

To add to his woes, Guga was injured after just 18 minutes to be replaced by Messi. Youngsters Zequinha and Rabiola had few opportunities in attack and were replaced by Fabio and Rodrigo midway through the second half.

Olhanense were the more positive side, had more possession and might have snatched the points when Castro’s long range effort whistled past the post.

With seven of the eight games finishing level, including Porto, Benfica and Sporting, the Algarveans will be pleased with this 0-0 result and the focus now turns to tonight’s (Friday’s) home game against U.Leiria at the Algarve Stadium.

Big match at the Algarve Stadium

Despite valiant efforts, the José Arcanjo Stadium could not be made ready for the game against fellow promotion newcomers U.Leiria.

Kick-off is at 8.15pm and tickets can be purchased at the stadium prior to the game. Last season these two teams drew 0-0 in Olhão. Olhanense were thrashed 5-1 in the return fixture as Leiria made a late surge to snatch promotion ahead of Santa Clara.

Leiria have two outstanding forwards in Cassio, 17 goals last season, and Carlão, 11 goals from 12 games following his move from Brazilian team S.Cristovão in the January transfer window. Olhanense will have Toy and Rui Duarte available for selection following their suspensions, while Greg Nwokolo, Eder Baiano and Gomis will hopefully have received international clearance.