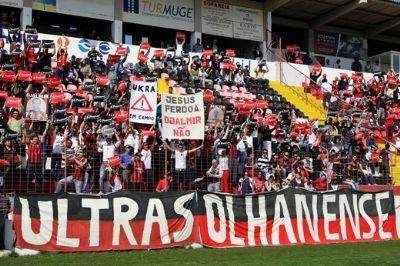 There was a carnival atmosphere at the José Arcanjo Stadium in Olhão as 5,500 spectators gathered to watch league leaders Olhanense take on Algarvean rivals Portimonense.

Earlier in the season, Olhanense had won 3-2 in Portimão when controversy surrounded the winning goal but there was to be no repeat on this occasion.

Under a sun-drenched sky, the game was virtually over after only five minutes when the visitors’ defender Tambussi bundled over Djalmir inside the penalty area. Tambussi was dismissed and Djalmir dispatched the spot kick.

Twenty minutes later and the ever-improving Ukra weaved his magic as he threaded his way past two Portimonense defenders before delivering an inch perfect cross for Djalmir to nod home and make it 2-0.

Olhanense were displaying a feast of footballing skills for the live Sport TV audience and the appreciative home crowd were waving their red and black placards saying É POSSÍVEL which refers to the expectation that this season promotion is a distinct possibility.

With half-time fast approaching, Messi burst into the box and his powerful volley was well saved by Portimonense keeper Alê, but Djalmir was on hand to bag his second hat-trick in three games and bring his tally to 18 for the season.

The interval gave the fans a chance to read the new monthly magazine RIA, which will be distributed free throughout central and eastern Algarve. It is good to see the club embracing the expat community with two pages in English.

Club President Isidoro Sousa said: “It is very pleasing. They have been tireless in their support and are much in love with Olhanense. We hope they keep supporting us and bring more Britons to Olhão. I am very optimistic.”

The second half was an anti-climax, with the home side controlling the game and the central defensive partnership of Marco Couto and Anselmo snuffing out the occasional Portimonense attack.

Olhanense took off Rui Baião, Toy and João Gonçalves to be replaced by Bruno Mestre, Guga and João Paulo and it was João Paulo who scored the final goal in stoppage time.

The visiting fans are to be applauded for continuing to cheer their team throughout the ninety minutes but it was the home fans who rose in unison at the final whistle to celebrate three straight wins, scoring ten goals and only conceding one. Could this be the year that top flight football returns to the Algarve?

Santa Clara won 2-1 at Estoril to stay one point behind Olhanense, Feirense could only draw 2-2 at Boavista while Leiria moved into third place with a 3-2 victory at Sp. Covilhã.

With the top two teams being promoted Olhanense are now seven points clear of third place with eight games to go. Their next game is away to Oliveirense on April 5.