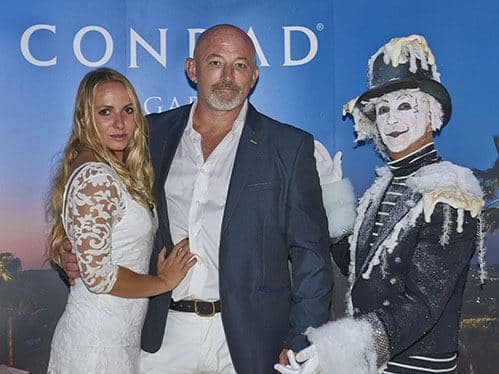 Three wins in four games, including two away from home, inspired the Algarve’s top football team to produce a great team performance against Sporting Lisbon at the weekend.

The crowd of nearly 5,000 witnessed a compelling game in which the home side came from two goals down to earn a hard fought draw.

The home side were without the influential Paulo Sérgio, suspended after being sent off in the 2-0 win at U.Leiria, so it was left to Jorge Gonçalves to mastermind the comeback.

In the opening twenty minutes, Sporting were in total control and Olhanense only started to fire on all cylinders after the visitors opened their account.

Halfway through the first period Helder Postiga crossed from the right but Maniche’s shot was blocked. The ball cannoned high into the air and Postiga, clearly in an offside position, headed home from an acute angle.

This setback was the catalyst that Olhanense needed as they started to carve their way through a Sporting defence that had only conceded eight goals in nine games away from home, having won the last four on their travels.

On thirty-five minutes a superb cross from Jorge Gonçalves picked out Djalmir but the normally reliable centre-forward could only prod his shot wide of the upright with the goal at his mercy. Minutes later Sporting’s Montenegro international Vukcevic lost the ball in midfield. Ismaily cut inside and sent a searing shot only centimetres’ wide of the far post.

The temperamental Vukcevic then had a heated verbal exchange with his manager Paulo Sergio, which led to him being substituted at half-time.

These are difficult times for Sporting, who sacked their Director of Football Costinha a few days before the Olhanense game. The former Portugal international left his post after less than a year following a controversial interview he gave to SportTV.

Costinha criticised the club for selling Liedson, a decision he said was out of his hands. The former Monaco and Porto midfielder went on to say the Lions were unable to compete financially with Benfica and FC Porto, stating that the struggling Lisbon club should adopt a more “up front and realistic” position.

It is just the latest episode in a sorry season on and off the pitch for Sporting. The club are currently preparing for presidential elections in March after current incumbent Jose Eduardo Bettencourt announced he would step down earlier this year.

Now 23 points behind leaders Porto and ten behind Benfica, they may well have to settle for a UEFA Europa League place.

After the break Sporting increased their lead when Matias Fernandez played a delightful ball through to former Spurs player Postiga to score his second of the match and fifth of the season. The home supporters were despondent but all this was to change within the next five minutes. Firstly Ismaily missed an excellent opportunity when caught in two minds.

But the industrious midfield player immediately redeemed himself when, after an exchange of passes with Nuno Piloto, he slotted the ball into the far corner of the net past Rui Patricio.

The crowd were still celebrating when a jinking run down the right by Jorge Gonçalves took him beyond the visitors defence. He whipped in a fantastic cross that full-back Daniel Carriço could only divert into his own net. 2-2 and the home fans went wild.

Both sides were going for the win with open attacking play and centre-back Mauricio nearly won the game for Olhanense with his powerful header.

The drama was not yet over. Under pressure Sporting manager Paulo Sérgio was furious with the officials and with ten minutes to go, he was sent from the technical area to the stand by referee Olegario Benquerenca.

The officials were certainly upsetting both sets of fans with their erratic decision making. Olhanense substitute Adilson was sent-off in the 93rd minute for a high challenge on Torsiglleri that was worthy of a yellow but certainly not a straight red.

After the game Paulo Sergio, who was in-charge at Olhão from 2003 to 2006, was very critical of the officials which could see him in further trouble with the Portuguese FA.

Daúto Faquirá was full of praise for the character shown by his team and now looks forward to the trip to Portimonense tomorrow night (Saturday) for the first game at the refurbished Municipal Stadium.