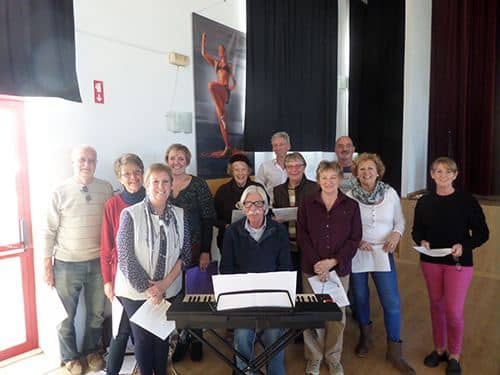 First Rehearsals for “Down at The Old Bull and Bush”

Rehearsals have started in earnest at the Alvor Community Centre for The Algarveans Experimental Theatre’s forthcoming production of Old Time Music Hall at the Teatro Mascarenhas Gregório in Silves on March 31, April 1 and 2.

Jan Sheppeard, who is directing this production and an “Old Timer” herself (as in being a fan of Old Time Music Hall we might hastily add), has everything planned down to the last act and minute.

“It’s going to be such a wonderful evening with something for everyone,” says Jan. “No one will leave without a smile on their faces and that’s what entertainment is all about.”

Jan, who has directed and appeared in numerous productions with The Algarveans and in the UK, is delighted at the opportunity to direct this latest show for the Algarveans. “The Teatro Mascarenhas Gregório is absolutely perfect for Old Time Music Hall. The audience will so love the atmosphere this theatre creates,” remarks Jan.

Jan, who has yet to announce the Leonard Sachs-style presenter of the show, is not giving away any secrets but has assured us the audience will love him.

So it’s definitely a man then, Jan? “You must excuse me, I have to get on with rehearsals,” she said and promptly disappeared amongst her troupe of volunteer thespians.

Old Time Music Hall was really made famous by the weekly production of The Good Old Days by the BBC. The show, staged at Leeds City Varieties, ran from 1953 and remained a firm favourite with viewers until its demise in 1983.

The Leeds City Varieties was able to create the atmosphere of the Victorian-Edwardian era and this is the aim of the Algarveans at the Teatro Mascarenhas Gregório – being that the theatre was built during that time.

The audience dressed in period costume at the Leeds City Varieties and the Algarveans will be encouraging women to wear appropriate hats reflecting that period. There will be a prize each evening for the best hat of the night.