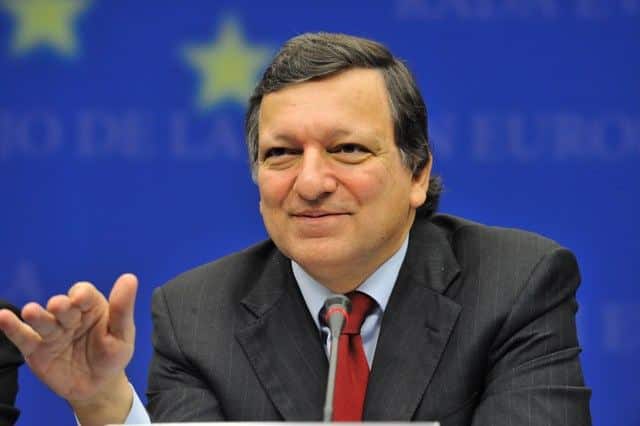 He has been cast as the “villain of the piece” in the latest “shock” coming out of Brussels – and described as an “oily Eurocrat from the land of sardines” – but outgoing European Commission President Durão Barroso is taking it all in his stride as he leaves his post this week after a 10-year stint. The reason he is smiling like a Cheshire Cat is that he is taking with him a millionaire’s pension: a minimum of €36,000 per month, plus three years of subsidies that could reach €367,000.
As one British commentator pointed out, it is not a bad reward for being part of a “collection of unaccountable, interfering, overpaid paper-shufflers and time-servers”.
The Sunday People’s Charlie Catchpole dubbed 58-year-old Barroso as “an oily Eurocrat from the land of sardines”.
Making much of the description, the BBC actually carried a picture of the former Portuguese prime minister, entitled “Mr Barosso (sic) without sardines”.
But the seasoned politician is unlikely to be bothered by this unflattering rush of attention.
It follows the story last week of Britain being slapped with a £1.7 billion bill issued by the departing European Commission.
The Mail on Sunday said the demand was viewed as “deliberate sabotage” of the Conservative Party in UK, currently at loggerheads with the EU over a number of issues.
For Barroso, this is all for successor Jean-Claude Juncker to deal with.
Barroso retires from the EC on November 1 and has guaranteed he will not be returning to the political arena.
In interview last week, he said his future “belonged to God” and that he was “open to offers”.
“Probably I will continue to be involved in public life and follow European and international issues,” he told journalists.
Analysing his “millionaire” future income, national tabloid Correio da Manhã said Barroso would be receiving a lifetime pension of €11,000 per month, plus an “additional salary” of €25,000 plus travelling expenses, as well as what is called a “reintegration subsidy” of between €122,000-€200,000 per year, for a maximum of three years.