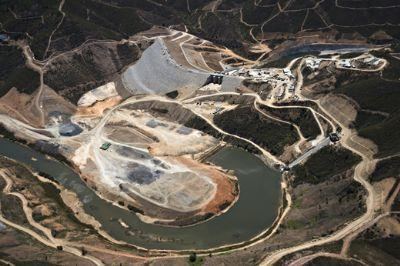 Odelouca dam, in the Silves and Monchique councils, is now ready to conserve water following the closing of its gates by Prime Minister José Sócrates, who was in the Algarve last week.

The work routine at the dam was interrupted on the morning of August 28 with the arrival of the Prime Minister, Environment Minister Nunes Correia, several Algarve dignitaries, including Mayors of Silves, Monchique, Portimão, Loulé and Faro, civil governor Carlos Silva Gomes, and members of the press.

In his speech, José Sócrates described the Algarve as a tourist region “par excellence” which needs to ensure water supply to all its citizens, visitors and businesses and “the closing of the Odelouca dam’s gates today means the beginning of the end of the well known problem of lack of water in the region”.

The Odelouca dam, a project approved by José Sócrates when he was Environment Minister in 2001, is set to become the main water supplier for the western Algarve, namely the councils of Albufeira, Aljezur, Lagoa, Lagos, Monchique, Portimão, Silves, Vila do Bispo and parts of Loulé council, with a capacity for storing 134 million cubic metres of water.

In the case of emergency, the dam has been built to be able to supply water to councils in the eastern Algarve.

Águas do Algarve, the region’s water supply company, estimates the total cost of the project to be 125.7 million euros, and describes it as essential to meet the needs for water in the region.

In a statement, the company said: “From studies we have carried out, we can confirm that, without this dam, Águas do Algarve would not have been able to ensure water supply to the Algarve, especially in periods of drought, such as the one in 2005.”

Carla Cupido, the engineer responsible for coordinating the construction of the dam, told the Algarve Resident that the main body of the dam was now completed, which means water can now be stored. Only works such as access roads and bridges need to be finalised and these are expected to be concluded in June 2010.

“It was vital that the dam started storing water now, in time for the winter rains,” she said. “The reservoir will take over a year to fill up to capacity; that is why it is so important to make the most of this winter.”

The water stored will then flow through the Odelouca-Funcho and Funcho-Alcantarilha tunnels until it reaches Alcantarilha ETA, the water treatment plant, before it is ready for consumption.

The Prime Minister said he hoped the Odelouca dam project would now be well received by all, as it hasn’t always been the case.

Work on the dam, which started in 2001, was met by strong opposition from the nature protection league in Portugal (LPN), which filed a complaint with the European Commission claiming the project was being built in an area protected by the Natura 2000 network and was “seriously violating environmental laws”. Following this, work was suspended between 2003 and 2006 and EU funds were cut.

Work on the dam resumed in 2007, solely funded by the state, after the European Commission dropped the case against Portugal, following assurances from the government that it would create a series of compensatory measures to minimise the impact the dam would have on the environment.

The creation of an Iberian Lynx reproduction centre in Silves, which was inaugurated in May, as well as habitats for the Bonelli’s Eagle and river species were some of the environmentally friendly measures imposed on the government to make up for the impact caused by the dam.