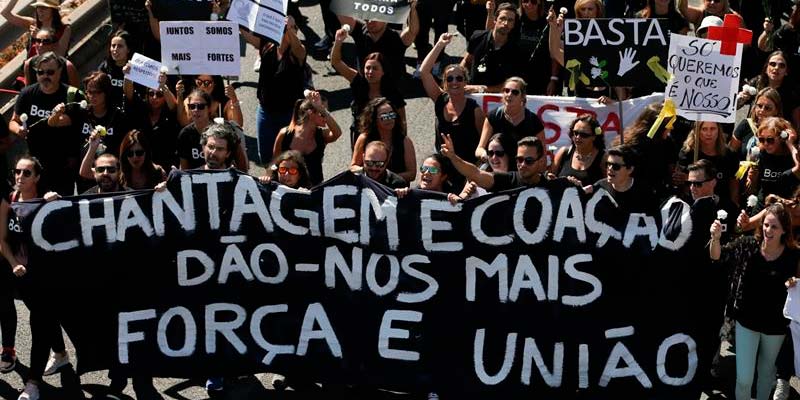 Moods are hardening on both sides as 10 hospitals are now in the grip of nursing unions’ ‘surgical strike action’ – a block on all non-urgent operations.

With the government said to be evaluating recourse to ‘civil requisition’ – a legal tool that would force nurses back into operating theatres – nurses have suggested they could extend this bitter dispute right up until October 6, the date of Portugal’s legislative elections.

ASPE, the association of nurses unions, will be meeting today to discuss all available options.

The bottom line here is that, yet again, negotiations to unfreeze pay and reinstate career progressions have ‘broken down’ – with the health ministry claiming the unions’ demands would cost the government 216 million euros.

The nurses’ strike action before Christmas saw as many as 10,000 operations ‘cancelled’ (click here) and numerous allegations that nurses were ‘overstepping the mark’ into the realms of illegality.

Health minister Marta Temida – coming into this dispute after her predecessor stepped aside – has repeatedly referred to the ‘ethical and professional questions’ that this kind of strike action raises.

But for now, nurses appear resolute.

On February 8 and 28, it is due to extend to three other centres: CH e Universitário de Coimbra, CH Lisboa Norte and CH de Setúbal.

Throughout, syndicates claim they will be adhering to ‘minimum service requirements’ which ensure urgent surgeries go ahead as normal.

In practice however, the pre-Christmas strike saw numerous ‘urgent surgeries’ cancelled, including those for oncology patients and children.

The lull over the festive season saw many of the postponed operations performed, but certainly not all.