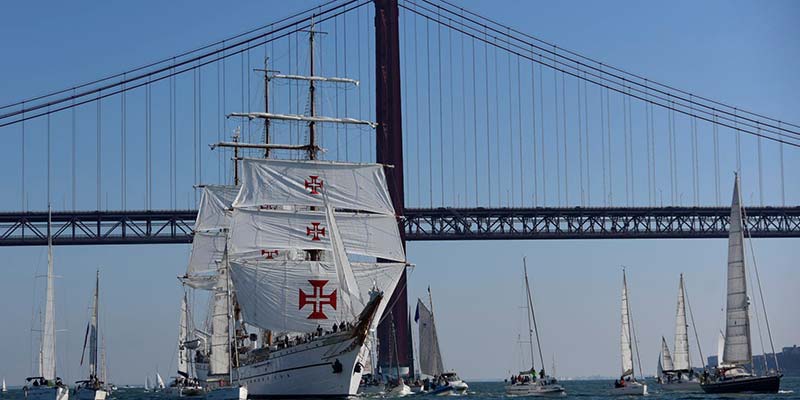 None of those onboard have the worry of any symptoms – just the sadness of what should have been an extraordinary experience shattered by unimagined happenstance.

As one of those onboard told reporters, the 142 crew have no idea what to expect when they finally step back on dry land. “The whole world has changed. It’ll get some getting used to”, he said.

The only ‘good news’ in this lacklustre return is that defence minister João Gomes Cravinho did his best to give the Sagres a hero’s welcome, thanking all onboard for their exemplary conduct throughout – and promising that the trip of a lifetime hasn’t been cancelled, merely postponed.

“We will make plans for a bright and optimistic future once more”, he promised, though no one today can hazard a guess as to when that might be.

The imposing three-masted ship was to have been at sea for 371 days. The plan had been to commemorate the 5th centenary of the ‘round-the-world voyage of legendary Portuguese discoverer Fernão de Magalhães; the idea, to promote Portugal in the 22 ports of 19 countries to be visited while undertaking scientific projects relating to biodiversity and climate change (click here).

The high-point of the exercise was to dock in Tokyo to coincide with the 2020 Olympics. But with the Olympics postponed due to the pandemic – and the world in varying stages of lockdown paralysis – NRP Sagres was ordered home mid-March, and started churning through the waters from Cape Town back to base in Alfeite.

Even so, the ship managed stops in Tenerife, Rio do Janeiro, Montevideu and Buenos Aires. In all, the ship spent four months at sea, travelling 15,869 nautical miles.

image: the splendid ‘send off’ from Lisbon in January