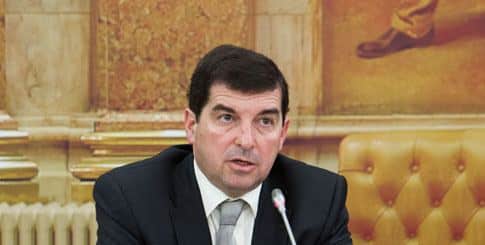 Less than a year after presenting losses of €468 million – but vowing Novo Banco would be making a profit by 2016 (click here), the troubled bank’s president has posted new losses of almost one billion, admitting profits are no longer on the horizon in the short-term.

The 2016 date has been shunted two years down the line and Eduardo Stock da Cunha has blamed the hiccup “on the legacy of management decisions” made by former BES boss Ricardo Salgado, “the extent of which was not known” when the so-called good bank was created at a cost of €4.9 billion from Portugal’s Resolution Fund.

But the troubleshooter, brought in from Lloyds of London to oversee the ‘quick sale’ of Novo Banco, remains bullish, saying: “I don’t spend a second thinking about whether the bank is sold to BPI, Santander, BCP or Caixa.”

Observador hints however that something may be on the horizon.

Stock da Cunha’s brief in 2014 was to sell Novo Banco as quickly and efficiently as possible and then return to his ‘proper job’ at Lloyds.

According to Observador, he has told his immediate boss in London – Portuguese António Horta Osório – that he would like an extension of his leave till the summer, at which point “there may be some news”.

But he has also said this all depends on the Bank of Portugal.

If he is not wanted, he would “go tomorrow, to be nearer my daughters”, who (presumably) remain in the UK.

Observador reports that it was a two-hour press conference, in which endless numbers were bandied about, along with all the whys and wherefores behind yet another disappointing performance.

What is clear now is that losses will be the order of play for quite some time.

The bank cannot possibly be sold for the €4.9 billion injected into it, said Stock da Cunha – stressing “there are no banks in Europe worth today as much as they were worth in August 2014”, irrespective of their histories.

With a litany of lawsuits and former customers who say they feel they were defrauded by the BES/Novo Banco good bank/bad bank carve-up, the way ahead remains unclear, while the clamour for nationalisation appears to be growing.