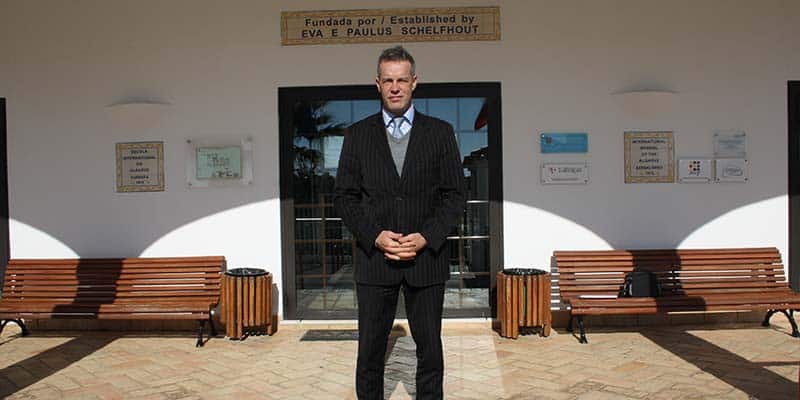 Jeremy Dow is the new Deputy Head of International at Nobel School International Algarve. He aims to make “an already great school even better” by encouraging a positive transition into the 21st century and enriching the school’s multicultural philosophy.

The 41-year-old Canadian has quite the resumé for his age and has been working at Nobel for four months after being invited to join the team by Head of School, Mike Farrer.

“The project that was presented to me was very attractive and very challenging professionally,” he said, adding: “I’ve come into a situation where I don’t have a lot to pick at in terms of negatives, but any good school has areas to improve.”

So, what will Jeremy look to improve during his time at Nobel?

Having gained a wealth of experience working in education around the world, he says he prides himself in multicultural acceptance and awareness: “I believe it needs to be encouraged and I hope to enrich an already rich school culture.”

As he explains, Portugal is a “very tolerant country but these ideas of tolerance and inclusiveness can be developed anywhere you go”.

Technology in the classroom

Introducing technology at the school will be another major goal, although Jeremy is well-aware that he will have to tread a fine line between making sure pupils are ‘technologically literate’ and ensuring they don’t become dependent on electronic devices.

“We will try to introduce a healthy use of technology. We’re living in a world that is device-dependant, so pupils have to be literate and functional with technology. I like the idea of lunch-time as a device-free zone. I don’t want to see phones and tables on the table, and I hope that teachers will follow this idea. The truth is, we’re all guilty of using them,” he admitted.

The new Deputy Head of International also wants to develop the school’s curriculum by making it more intercultural and improve Nobel’s academic results.

“They have been good, so we want to make good much better,” he told us.

These are still early days, however, and Jeremy says that the goals that are being set are part of a five-year plan, which is why he can’t yet reveal many more details on the ideas he plans to implement.

However, Jeremy Dow did tell us about a project he is “very excited about” – Nobel Algarve’s participation in a Model United Nations event in April.

The event is a kind of simulation of a real United Nations meeting, which the new Deputy Head says helps pupils practice their public speaking and debate skills.

“It essentially enriches their knowledge of modern world topics. Pupils meet with other students at a set school – in this case Madrid – and assume the role of delegates from specific countries to debate modern topics such as nuclear weapons proliferation and the Paris agreement targets”.

The event can also help students make “friends for life”. Around 10 pupils will be selected from a range of ages for the April event.

Although he says Portugal feels like a “home away from home”, the move to the Algarve has been “quite a shock” as he never thought about moving here.

“I am from a Portuguese district of Toronto, and I played football for a club amidst the Portuguese culture association,” he told us.

Jeremy actually had the opportunity to work in Portugal back in 2004 after finishing his degree in education. He had travelled to the country for the Euro 2004 and received an offer to work in Porto but ended up accepting a job at a First Nations Reserve in Canada “working with a very underprivileged community”.

“It was a good opportunity to learn, raise my cultural awareness, and develop my skill set. It was an eye-opener and a great experience.”

He also worked in the UK for several years for a special measures school and obtained experience in OFSTED (responsible for inspecting a range of educational institutions) inspections.

For the last 10 years, he had been working at the UN campus of Bonn International School in Germany, where he met his wife.

On a personal level, his present goals are to find a place to live in the Algarve, learn Portuguese and get a better understanding of the local culture.

“I don’t want to get stuck in an expat bubble,” he said, before revealing that he is already making the most of the Algarve climate, having gone for a swim in the sea this week despite the temperatures that have been particularly chilly by Algarvian standards.

“The water was cold, but I’m used to beaches in Canada where you can’t even go swimming in August!”