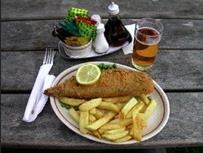 I have just returned from an evening with the parents – a couple of Valium and a good night’s sleep and I should be feeling sane again.

Perhaps I should have taken more Valium. My weekly visit began harmlessly enough, but then, it was casually announced that Auntie Jean and Uncle Richard were coming over. Then followed a very confusing phone call, in which four people all debated their requirements for the fish and chip supper, and how the spare chair (for me), currently residing in Richard’s garage, was to be brought over in Jeanie and Richard’s boot.

Thirty minutes later, as arranged, they arrived. Fifteen minutes of chaos followed, as bags were emptied onto plates, chips shared out over cross purpose conversations – a dinner hosted in sub zero temperatures because no one saw fit to close the front door.

I sat on the armchair (spare chair still in garage) and repeatedly declined offers of more chips, watching with interest the dynamics between people who have known each other for more than three-quarters of their lives – 50 years!

Auntie Jean and my mother (related through marriage) have been friends since primary school. They have clocked up around 65 years of what can only be described as ‘fine tuning’ a shared, well developed, acerbic wit. This wit is at its most caustic when targeted at their respective husbands, who, it has to be said, are led like lambs to the slaughter.

The most staggering observation I made was the inability of their husbands to detect where the next strike would come from. Pitiful half-hearted retaliations were occasionally aired, only to be crushed under another cutting remark about their DIY failings, domestic habits or general all-round ineptitude. With Round One over, we moved onto Round Two – the card game.

Considering they have been playing these same card games for over 50 years, it is a little surprising the number of misunderstandings that occur. Clubs are referred to as curlies, trumps are seldom remembered (sometimes forgotten by all parties present) and misdeals are as common as tea breaks.

Auntie Jean has a very pointed way of stating what’s going on in her head so that my mother knows her hand as intimately as she, with the un-stated, but self-evident goal being to beat the husbands, thereby confirming the mutual conviction that all men are hopeless.

The culinary extravaganza did not end with the food from the chippie. The 60+ generation, it appears, do not waste time with sorbets, olives and fruit. As the evening progressed, nuts, crisps, doughnuts and trifles were wheeled out at regular intervals, often buried under a mountain of ‘squirty’ cream. My culinary contribution consisted of Turkish baklava (from the corner shop), which was politely sampled and not commented on.

It has just been brought to my notice that my inclination towards exaggeration, coupled with my aspirations to wittiness (clearly failing), has caused a bit of a rumpus in some quarters of the Algarve. Last month, I referred to Martyn’s efforts to deter and then catch the mongoose, who has to date dined on 15 chickens, six ducks and five turkeys. For dramatic effect, I claimed Martyn was dashing around making snares in order to end this tyranny. That statement was in fact a barefaced lie – its sole purpose being to generate imagery in order to amuse. If you found the comments distasteful, please accept my apologies and rest assured that the only animals to suffer a macabre untimely death have been the aforementioned poultry. Their brethren, who have witnessed the daily carnage, are now too traumatised to lay eggs so we are desperate to find a (humane) solution. Any ideas will be gratefully received.

The mongoose (still alive you will be pleased to hear) has dined on our last chicken. The loss of so much livestock is made worse by the fact that I am still in England, living on Tesco’s ready meals. There appears to be no justice in the world.

Martyn left the house this morning to encounter a proud looking cat (George) sitting by his food bowl, admiring a dead goldfish. Never let it be said that our cats have no table manners – all that was missing was the napkin and wine. Perhaps we will have to surround the pond with electric fencing. How pleasant our garden will look.

A friend who has been staying with Martyn on the farm for 10 days returned to London yesterday. Apparently it has rained every single day, not something a tourist expects for his holiday in the Algarve. His boredom was alleviated to some extent, however, by animal antics.

Heavy rain, a wooden post and power cuts all combined to reduce the effectiveness of the electric fence, resulting in a pig escape! Both Eggs and her daughter (un-named due to the fate that awaits her at Easter) were frolicking merrily on the expanse of land previously enjoyed by the poultry (prior to mongoose attacks).

Martyn had to spend three hours in steady drizzle repairing the chain link fence, re-instating the electric fence and enticing the pigs back home with bucketfuls of goodies. We are now giving serious consideration to re-homing the pig to sturdier accommodation, nearer the track. This will make feeding simpler and mean that when we slaughter them, we are not faced with the prospect of carrying over 80 kilos of dead weight uphill to the house. This will have the added benefit of enabling us to build a sturdier house – one that can’t be destroyed every few months or so. The problem (there is always one) is moving Eggs up a couple of terraces to a new abode. We are currently toying with the idea of leaving her hungry for a couple of days and then luring her up with food – that should be fun.

I am homesick – for the first time in my life – roll on Easter.