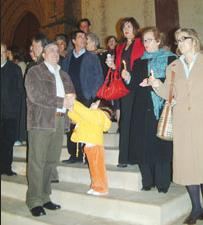 SILVES CÂMARA President, Isabel Soares, joined local residents in a silent protest in front of the town’s cathedral, against the Ministry of Culture’s lack of action to restore the historic monument, on Saturday night, March 1 (see The Resident, July 19 2007).

Around 70 people of all ages from the local community turned out to protest with candles lit in front of the monument.

Isabel Soares told The Resident: “I received an official notice from the Ministry of Culture yesterday (Friday), saying that it does not have the funds for the restoration work and that we should look for sponsors ourselves to pay for the work.”

Silves’ catholic priest, Carlos Aquino, who was also present at the protest, said he was saddened by the lack of response from the Ministry despite the local community being willing to raise funds and find sponsors.

“This could be the first of many protests,” said Isabel Soares. “If residents want to protest outside the Ministry of Culture in Lisbon, I am willing to accompany them, or they may accompany me on one of my visits to the capital.”

Mendes Bota, regional leader of Portugal’s Social Democratic Party (PSD), also sent an official letter to the parliament president last Friday, asking the government to answer why nothing has been done to restore Silves Cathedral.

The Resident contacted the Ministry of Culture, but no one was available for comment at the time of going to press.