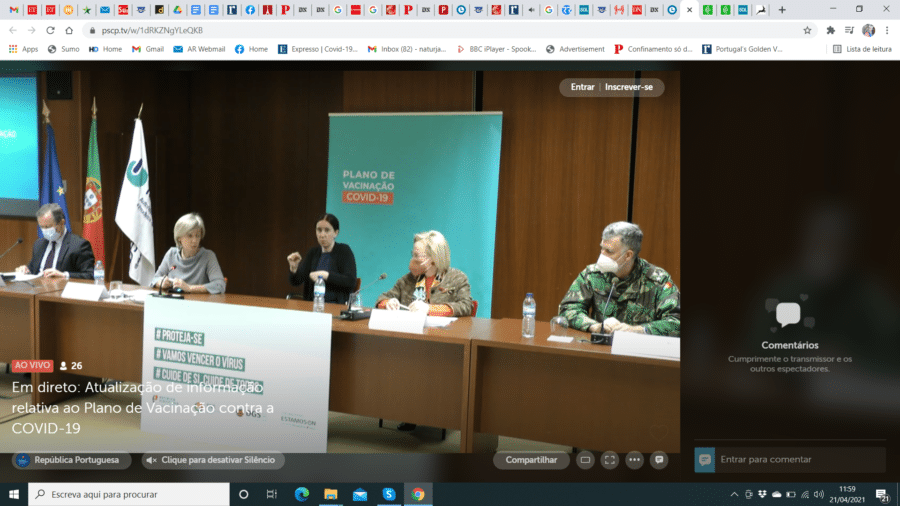 After another ‘week of hiatus’ regarding Europe’s vaccine roll-out, regulators have come to the conclusion that the risks of clotting after receiving the Johnson & Johnson vaccine are not sufficient to outweigh the benefits to those who receive it. Its administration is reported to be confined to the over-60s in some countries, but here in Portugal it will be offered to citizens of all age groups, while European regulators continue their process of ‘assessment’.

In a press conference this morning, authorities have been outlining the next steps in a vaccine roll-out that is finally picking up pace.

Health minister Marta Temido has said that all over-60s should have received at least one dose of vaccine by the end of May.

The long-awaited ‘target’ of jabbing 100,000 people per day is apparently ‘much closer’, as two million citizens (20% of the population) have already started the process of being immunised (even if this means the vast majority are still awaiting their second shots), and another 2.9 million doses of vaccine are on their way here.

The next ‘phase’ is concentrating on 70-79-year-olds and all those with active cancers, AIDS, diabetes, obesity, psychiatric illnesses (like schizophrenia)  and people suffering compromised immunity (including people who have received organ transplants).

Said DGS health director Graça Freitas: “We have created two simulateous vaccination strategies: one intensive very large one focused on age, and another which allows groups of people who are ill to be vaccinated with priority”.

Vaccine coordinator Henrique Gouveia e Melo has said the goal of vaccinating “100,000 people per day, everyday, seven days a week, for four months is not an easy task because it is massive, urgent in terms of time and naturally complex”. But according to simulations “we will be successful”, he insisted – dismissing the loss of 5,000 vaccines due to an overnight power cut last night (see ‘briefly news’) as ‘one of those things’.