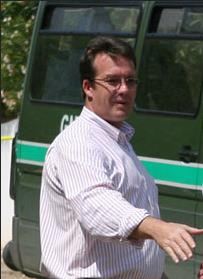 ROBERT MURAT has received an apology from the Scotsman newspaper for publishing defamatory allegations about him.

In the apology on May 16, the newspaper said: “On 15 May (2007) an article about Robert Murat headed Madeleine: He jokes of being No.1 suspect was published in which we reported a number of defamatory allegations about Mr Murat in connection with the abduction of Madeleine McCann.”

The apology continued: “Likening his behaviour in this way to that of Soham murderer, Ian Huntley, suggested that he was involved in the abduction of Madeleine McCann. It was a seriously defamatory allegation and wholly untrue.”

The newspaper also said that it wrongly implied that Robert Murat had been unfeeling and insensitive about Madeleine McCann’s disappearance and had lied about his role in the police investigation, adding that this was not their intention.

“We accept that Mr Murat was assisting the police investigation into Madeleine McCann’s disappearance and that his behaviour was entirely proper throughout, and we are happy to make that clear,” said the apology, adding: “We apologise to Mr Murat for the hurt, distress and damage to his reputation caused by the article.”

The Johnston Press-owned paper did not pay out any damages.

Robert Murat’s lawyer in Portugal, Francisco Pagarete, told The Resident: “I can confirm that my client did receive an apology from the newspaper, however, my colleagues, the solicitors Simon, Muirhead and Burton in England, are dealing with this process.”

In April, Murat took legal actions against 11 British newspapers and Sky News for stories linking him to the investigation and accusing him of being a prime suspect.

In an unrelated development to the case of missing Madeleine McCann, Rogério Alves, one of Gerry and Kate McCann’s Portuguese lawyers, said that a reconstruction of the little girl’s disappearance could be carried out this month.

“The reconstruction was scheduled for this month,” he said, adding that there were “strong possibilities” that it could still take place at the end of May, although he was not aware of an exact date.