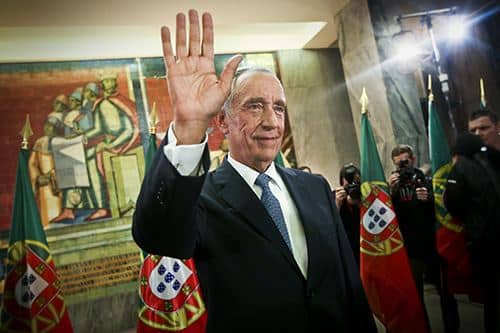 He promises to nurture national unity, reinforce social cohesion, promote political consensus and “turn the page for the country”. But under the growing pressure of international scrutiny – from the bogeymen of Brussels, to the ECB, Commerzbank and every other financial heavyweight active in Europe – can the law professor ‘who never sleeps’, swept to power as president over the weekend, really do it? He may be the darling of the popular vote, but will Marcelo Rebelo de Sousa manage the delicate juggling act needed to keep Portugal on track under a fragile government? Intriguingly, international observers reckon he “will probably not be shy” when it comes to dealing with political stalemates stacking up on the horizon.

In fact, the Wall Street Journal has gone so far as to suggest Rebelo de Sousa would dissolve parliament “if cracks emerge in the ruling left-wing alliance and governing the country becomes increasingly difficult”.

Quoting political risk analyst António Barroso, the paper cut to the chase within hours of the energetic 67-year-old storming to victory as an independent candidate after a campaign in which he spent hundreds of thousands of euros less than almost every one of his nine adversaries.

It took another day before commentators in Portugal were saying the same thing.

In his habitual slot on SIC on Monday, Miguel Sousa Tavares said Marcelo (as the country’s new president is known) may have said that in the short and medium term he will be the “best friend” of Socialist Prime Minister António Costa, but Tavares hopes that he isn’t.

“A president has certain political powers,” he explained. “And he should use them – otherwise it makes no sense that he is elected by universal suffrage.”

What worries Tavares, he told SIC evening news, is that throughout Rebelo de Sousa’s animated campaign in which he kissed old ladies, complemented people on the colour of their hair and joked with fish-sellers in crowded markets, he “ran away from all political questions, almost giving the idea that once he was elected, he wouldn’t have an opinion on anything, he’d just be there to sign decrees and support the government”.

The problem with this, Tavares continued, is that Portugal is living at a moment where parliament has ‘conquered’ various powers over the executive “because of the alliance that António Costa has made with the majority in the (republican) assembly.

“If the president abdicates himself from the political intervention to which he is entitled, and which in my mind he should exercise, then we would be seeing a whole new parliamentary regime” – one at odds with the Constitution, which Marcelo himself actually helped write in 1976.

Thus the pressure is on this new figurehead in Western Europe’s poorest country to pull some kind of cat out of the bag, in a way outgoing president Cavaco Silva never has.

Writing in Expresso, ‘opinion maker’ José Gomes Ferreira puts it quite simply. There are four questions that need to be put to Rebelo de Sousa, and they all refer to the incredible mess the country has been allowed to fall into.

Citing the pressure from international creditors, and distrust with which investors view Portugal in the wake of recent decisions by the Bank of Portugal, Gomes Ferreira suggests it is time the country had a president who “slammed his fist on the table” and brought politicians into line.

“It was lamentable that throughout the presidential campaign, none of the candidates said the obvious,” he said, the real reason for all the country’s ills: “The lunatic rhythm of debt … on an average of €2 million per hour, €48 million per day, throughout years, thanks to the collusion of politicians, bankers, company directors, construction companies, lawyers, stock market speculators and property developers.”

A crisis generated by the appalling orientation of “gigantic resources of cheap credit by banks” and “fat cat community subsidies” that “never got to the firms and sectors that needed them”.

In the face of “all this”, Portugal had a president “strictly preoccupied with the limits and formalities of his mandate”.

Thus Gomes Ferreira’s questions:
▪ Will this new man at the top spend his time strictly interpreting the limits of his mandate?
▪ Will he leave the signs of a worsening financial situation to stack up without vigorously -questioning the government this or any other?
▪ Will he once again accept unstable governmental solutions without rapidly promoting changes to an electoral system that has remained immobile for 40 years, showing clearly that it doesn’t serve the country?
▪ And will he let Portugal hit the bottom once again by not choosing a better path?

With the pomp and ceremony still to come – Rebelo de Sousa’s ‘investiture” is not official until March 9 – there is so much at stake, and as veteran Algarve journalist and commentator Len Port remarked in a piece on last Sunday’s election victory, it is probably just as well that Marcelo claims only to need five hours sleep a night. He will need all the hours he can get.