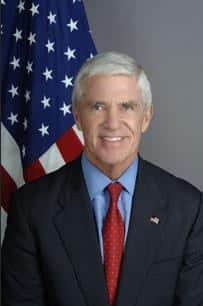 THE NEW American Ambassador to Portugal presented his credentials to the President of Portugal, Cavaco Silva, on Friday, February 8.

Thomas Stephenson was born and grew up in Wilmington, Delaware, beginning his university studies at Harvard where he did a degree in Economics. He then went on to take an MBA at Harvard Business School and a degree in Law at Boston College.

Before being nominated an ambassador, Stephenson was a partner for 19 years at Sequoia Capital, a venture capital company based in Silicon Valley, where he focused his attention on a vast number of information technology and health service sector companies.

During the 38 years that he was involved in venture capital sector, Thomas Stephenson sat on the board of more than a dozen public and private companies.

He has also worked as an insurance analyst for the Fidelity Management Company and helped found Fidelity Ventures, the company where he became President in 1977. In 1987, Stephenson left Fidelity Ventures to join Sequoia Capital.

Throughout the years, Thomas Stephenson has remained actively involved in affairs linked to Harvard University, sitting on its university board of governors. Stephenson is, equally, a member of the Board of Deacons at Stanford University’s Hoover Institution and an Economic Policy adviser at the Wilson Centre. He is also vice-president of the Kennedy Centre Corporate Fund.

While living in Boston, he was, for many years, curator, administrator and member of the Executive Commission and President of the Financial Commission at Tuft’s New England Medical Centre.

Thomas Stephenson lives with his wife and son in Lisbon. He has another three adult daughters living in the United States.