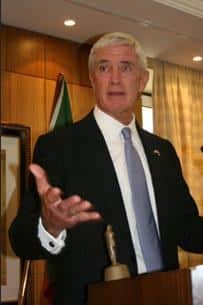 IF THOMAS F. Stephenson was asked which party would win the forthcoming US Presidential elections a few months ago, he would have said that the direction hinged on the situation in both Iraq and the Middle East.

He admits that this is no longer the case. According to polls and the way the votes are coming in from the Primaries and Caucases, US concerns over the flagging economy and the continuing jitters over the sub-prime mortgage crisis is now one of the main, if not the key issue.

With Mitt Romney’s decision last week to pull out of the Republican race and endorse rival John McCain as the official Republican candidate, at least that part of the equation is solved.

But when it comes to Democratic candidates Hillary Rodham Clinton and Barack Obama, “it’s pretty close.”

“A lot of people suggest Senator Obama has the momentum and the outlook at the Primaries (last week) looks promising for Obama, but it’s a long way from over,” said Thomas F. Stephenson.

Senator Clinton has a big organisation, a well-seasoned bandwagon and her husband Bill Clinton can be viewed as either an incredible asset or a liability.

However, the ambassador believes that those “who underestimate the Clinton machine do so at their own peril” as the race is not over.

There were 769 so-called ‘super delegates’ in the Democratic Party, representing 18 per cent from a total of 4,500 delegates that will vote for the Democratic nominee. These are senior, professional politicians in the party or members of the national legislature.

“It’s conceivable that the election will revert back to the situation the US had in the 1950s or early 1960s and the candidate won’t be determined until the Convention and the proverbial ‘smoke-filled back rooms’ may come into play,” he said.

A lot can happen with the big forthcoming Primaries in Pennsylvania, Texas and Ohio when it could be possible that a clear Democratic leader might emerge.

On the other hand, there may be a force of consensus, whereby the Democrats will decide a candidate behind closed doors because an ongoing battle all the way to the Party Convention would only help the other side.

John McCain (48 per cent) has benefited from advice given on Iraq which proved correct since the Iraq War is much less of an issue in domestic politics at present than it was in the last elections.

He is described as a very candid individual, who operates particularly well in small groups and has done a great job with relatively little funding.

Mitt Romney focused heavily on early Primaries, raised a lot of money and he and his advisors made a decision to position themselves to the right of the Middle of the Road candidates Rudi Giuliani (now dropped out) and John McCain.

But Romney’s ‘born-again’ Conservatism was not bought by the general public – who remembered him as Governor of Liberal Massachusetts – resulting in a lack of credibility. Then again the Mormon issue may have also weighed in there.

Rudi Giuliani’s (dropped out January 30) strategy “just didn’t work – he concluded that he wasn’t going to be competitive in some early states and would stake all on Florida and large Super Tuesday states,” explained Thomas F. Stephenson.

But by the time Super Tuesday arrived he was done for, with Florida ending up his last stand when he was fairly and squarely beaten.

Mitt Romney had more money than the other candidates yet money has proved a lot less of a factor than people had anticipated, while Fred Thompson’s (seven per cent) campaign never gained momentum.

Democratic Senator John Edwards’ message of class warfare never caught on and it was unclear if his wife’s breast cancer disclosure won him any real support.

So now that John McCain is the chosen Republican candidate for the White House race; that leaves just Hillary Clinton (44 per cent) and Barack Obama (45 per cent) for the Democrats.

“Clinton is a polarising figure; a lot of people really just love her but she also has very high negatives.”

“Obama is charismatic and has done a much better job of raising money than anyone would have forecast, particularly online and with a broad group of supporters,” said the ambassador.

So, what will happen in the actual elections in November? “I can’t forecast that but the state of the economy has put a different light on things,” Thomas F. Stephenson concludes.