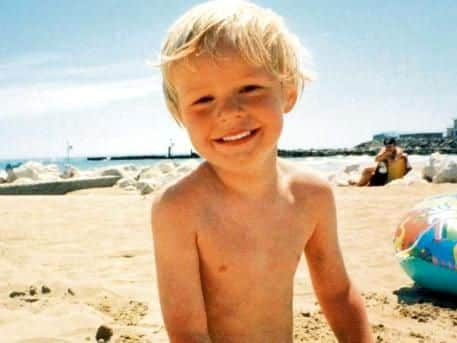 He is said to be convicted German pedophile Martin Ney, serving a 27-year sentence for the murders of three boys (aged 13, nine and eight) when they were on holiday with their families, between the years 1992 to 2001, and suspected of having committed at least two other murders of young boys, one in Holland in 1998, the other in France in 2004.

Said reports over the weekend, Ney – originally from Hamburg – was in Portugal at the time Madeleine went missing.

He was interviewed by Portuguese police in 2008, and discounted as a suspect – not simply because he denied any involvement, but because, according to information received, he was ‘only interested in boys’.

Various media sources add that Ney, now 48, was also questioned (but never charged) by police investigating the disappearance in 1996 of a six-year-old German boy from Amoreira beach, near Aljezur.

This particular mystery never got anything like the publicity afforded three-year-old Madeleine – possibly because one of the theories was that blonde René Hasse may have been swept out to sea (an explanation his family has never accepted).

But while reports in UK and Portugal now claim police in both countries are working together on the Ney theory, there is the added ‘confusion’ of comments made by the original lead detective in the case, Gonçalo Amaral, that a “German pedophile in jail” was being used as a “scapegoat” to wrap up the Madeleine case once and for all.

Amaral made his comments to reporters who presented the recent Netflix documentary, released in April – a production trailed with the ‘bombshell’ that Madeleine “is still alive” (click here).

After so many years, the number of sources that believe Madeleine is still alive seems to be growing.

The Resident is regularly contacted by ‘armchair detectives’ – two of which are convinced she is alive and living with a family that she believes to be her own.

Both sources claim to have been in touch with Portuguese and British authorities with their evidence, so far to no avail.

Is all the current fuss simply related to the fact that we are now right ‘inside’ the 12th year anniversary (the evening Madeleine went missing on May 3 was commemorated last Friday, and the date of what would be her 16th birthday falls next Sunday, on May 12)?

Press reports refer to the fact that Ney “closely resembles a photofit of a man seen with a child in his arms shortly after Madeleine vanished”.

But this too is confusing – as the photofit of the man carrying a child in his arms was ‘discounted’ last year as being a genuine case of a father carrying a child home from the nearby creche.

And the photofit that ‘could be Ney’ is one that was originally produced of someone ‘acting suspiciously before Madeleine vanished’ (but not carrying a child…).

The paper adds another German suspect to the mix, saying “in 2015 it was reported that British police were closely following a second German child killer suspected of murdering a schoolgirl. It is not known what the outcome of the probe was”.

And then it brings in gypsies, suspected child-selling rings and former British ‘pervert’ Raymond Hewlett who was not only in the Algarve at the time Madeleine went missing, but “had links to Germany”.

In the space of a few paragraphs, the article strays further and further from what exactly could be pinning Madeleine’s disappearance on Ney – and why it has taken so long for the information to come out.

To add to the confusion, Correio da Manhã waited until Monday morning to claim that Ney is ‘not the suspect’ Portuguese police have their eyes on.

For those fascinated with this mystery, the various reports have made colourful reading – overshadowed by the voice of Amaral ‘in the background’ saying the equivalent of “this is all a stitch up” .

If nothing else the stories have revived the baffling disappearance of René Hasse – whose mother described the moment he went missing as if he had been “swallowed up by the earth”.

A ‘crimewatchers’ online site describes the child’s grandmother saying that “his footprints stopped in the middle of the sand”.

The family cannot accept that René drowned. They say he was terrified of the waves (ever-present on the west coast) and would never have gone close enough to be caught by one.

He is not even included in any list of children missing in Portugal.