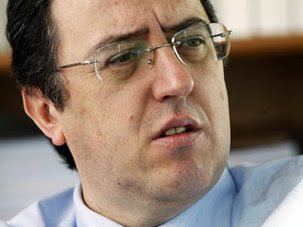 Super-judge Carlos Alexandre is reported to have a new shock on his hands today: the fact that two of the men detained along with José Sócrates as a result of Operation Marquês have been put in the same prison cell.
Sócrates’ driver João Perna, and his long-term childhood friend Carlos Santos Silva – both rounded up as Sócrates flew from Paris to Lisbon to face the authorities – are reported to be sharing a cell in “sector five” of the jail attached to Lisbon’s PJ headquarters.
Prison services have been loathe to confirm this – preferring only to say the two men are in the same wing. But SIC noticias and other newspapers have revealed that both are in a two-bed cell – and this reality “could seriously compromise” the entire case.
“Nothing good could come from putting (these men) together”, a magistrate is quoted as telling Correio da Manhã. In fact, he claimed in today’s paper, “only bad things” will come.
As CM affirms, the men’s being together “could contaminate the case and allow the creation of common strategies”.
This is simply the latest shock to batter Operation Marquês – rapidly becoming known for being a corruption case handled like no other.
As the former prime-minister receives a constant stream of high-ranking visitors seemingly round the clock – all of whom proclaim his innocence – leader writer Luciano Amaral suggests Sócrates has become a form of modern-day Count of Monte Cristo, the legendary merchant sailor wrongfully imprisoned during Napoleonic times.
As anyone who knows the story will recall, the Count escapes from jail, acquires a fortune and sets about getting revenge on those responsible for his imprisonment.
Thus Amaral maintains “this story has hardly begun”.
For now, the country hooked on TV soaps is already addicted to the drama that throws up new sub-plots by the day.
According to a recent poll, only 16.8% of Portuguese believe the former Socialist leader is innocent, while his own party is very much divided – with 37.8% considering Sócrates not guilty of accusations of fiscal fraud, money-laundering and corruption while 37.9% think that he is.
And while the soap continues, CM reports that the director of prisons, Rui Sá Gomes, was a minister for Internal Administration during one of Sócrates’ governments. Indeed, it is reported today that it was Sócrates who put Sá Gomes in charge of the country’s prisons.
Not surprisingly, Sá Gomes has this far refused to comment on the wisdom behind putting two prisoners involved in the same case into the same prison cell.
According to CM, super judge Alexandre now has to decide whether they should be separated, or allowed home on electronic bracelets.