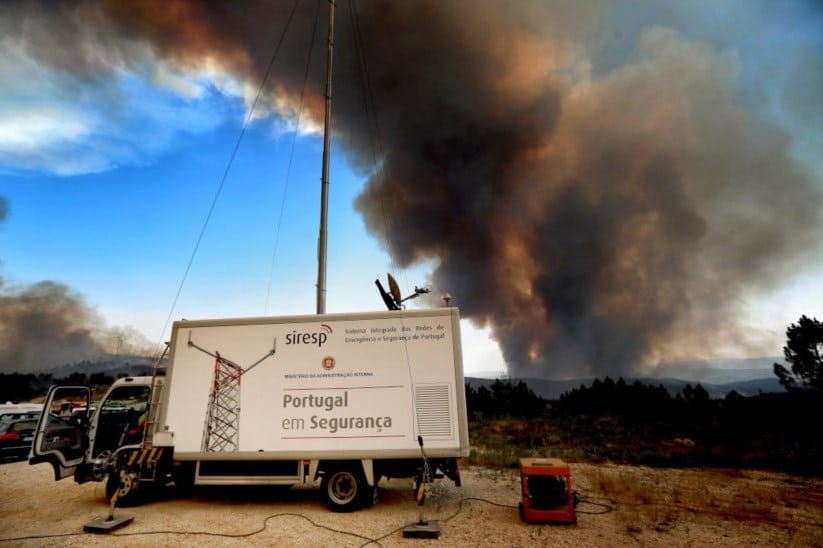 New pressures have piled onto the beleaguered ministry for interior administration (MAI) today: the head of SIRESP, the State’s communications network, has quit just as French operator Altice appears to have pulled the plug on it.

If the ‘extinction of SEF’ was indeed devised to take the heat of interior minister Eduardo Cabrita (click here), he has suddenly found himself immersed in further extremely hot water.

SIRESP is considered vital during the ‘fire season’ – which, in spite of April showers, is almost upon us.

When it works, it can mean the difference between life and death. When it doesn’t, it can lead to appalling tragedies like when GNR agents diverted motorists onto a road from which hardly any of them emerged alive (click here).

In other words, Portugal needs it, particularly this close to the wildfire season.

But what tabloid Correio da Manhã describes as ‘a war’ between the government and Altice has seen to it that the current contract is about to lapse, with zero in terms of negotiations in place over what will come in its place.

Altice’s CEO Alexandre Fonseca has said “even if we wanted to (keep SIRESP working) with a view to seeking to protect people, we cannot because we have absolutely no contractual framework in position, and we cannot provide this service”.

Firefighters have suggested it’s time for the government ‘to look elsewhere’.

“No government can be held hostage by a company that very often talks only from a commercial perspective, and not in using the service for the sake of the population”, said president of the association of professional firefighters Fernando Curto.

But earlier this week, Eduardo Cabrita ‘guaranteed in parliament’ that in spite of the end of the contract “the system would continue to function”.

According to Mr Cabrita, a “profound reform of MAI’s own communications system” is underway and “will integrate SIRESP, (emergency number) 112 and the national network for internal security”.

This reform, he said, “is already in legislative process”.

If Mr Cabrita was slightly bending the truth, it won’t be the first time (click here).

Certainly what has happened today is that General Manuel Couto, nominated to take charge of SIRESP only a year ago has quit – citing “personal reasons”.

What this all means is on June 30, Altice’s current contract with the Portuguese State expires and no-one seems to see this as ‘a good thing’.

The PSD opposition sees the situation as another occasion where MAI has sat on its thumbs.

By having done little in the form of ‘working out what happens next’, the centre-right party says the government has “created the inevitability of continuing tied to technical contracts and operational management” of the likes of Altice (and Motorola, which is also involved in the expiring agreement) “losing the opportunity to launch public tenders which allow for wider competition with obvious gains for the public purse”.

This is not the only ‘war’ Altice has with the government. It is still at loggerheads with State regulator ANACOM over the implementation of 5G (click here).