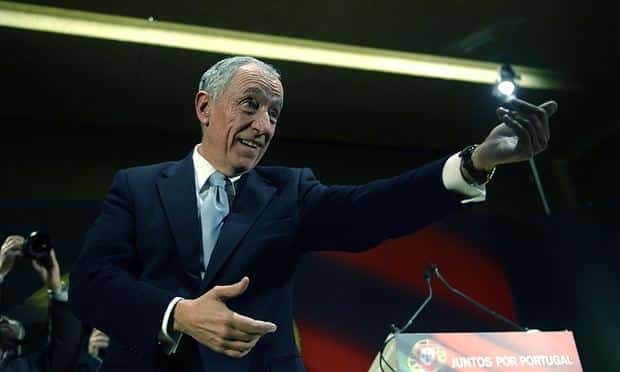 In contrast to the political mishmash created by the recent general election, Sunday’s presidential poll shooed in a clear winner who promises to be a force for stability.

The 20th President of the Portuguese Republic, Marcelo Rebelo de Sousa, is expected to play a crucial role in calming the country’s current volatile situation. He could be pivotal in Portugal’s political future.

Although formerly a leader of the centre-right Social Democratic Party, he is regarded as a moderate and has described himself as being “on the left wing of the right.”

At 67, Lisbon-born Rebelo de Sousa has been a government minister, a professor of law and a journalist. He enjoyed great popularity as an enternatining political pundit on national television. He is reputed to read two books and sleep for only four or five hours a day. For fun he goes surfing in the waves off Guincho Beach, Cascais.

On moving into the Palácio de Belém, the official residence of the head of state, Rebelo de Sousa will assume largely symbolic and ceremonial duties. He will have no administrative role, but he is known to favour conciliation and consensus. His powers of persuasion in acting as a counterweight could become key.

“Everything that helps to build political stability, common ground that safeguards governability is a priority…. now is not the time for divisions,” he said prior to the election.

The constitution allows the president exceptional powers in exceptional circumstances. He will be able to dissolve parliament, appoint prime ministers or call for a new general election if deemed necessary.

Few commentators think the present minority government under Socialist leader António Costa can survive a full four-year term because it relies on support from the radical Left Bloc and the Communist Party.

The president and the country will be watching carefully as the government struggles to curb the burden of austerity, which means lowering taxes, reversing public wage cuts, increasing the minimum wage, restoring public services and lifting the freeze on pensions….. all this while reducing the deficit, boosting consumption and investment, and complying with EU rules on fiscal discipline without the anti-EU far left pulling the plug on their support.

Costa says he is confident Brussels will approve Portugal’s 2016 draft budget presented last Thursday. It will now be analysed by the European Commission. Changes could be ordered before the government starts implementing the budget.

At the the World Economic Forum last week in Davos, Switzerland, the Socialist economy minister, Manuel Caldeira Cabral, said: “I don’t think that the presidential election is going to bring any surprise or any problem to the government.” He added: “The centre-right wing candidate is quite moderate and it was quite sure that he is going to maintain the government and the legislature.”

That could be wishful thinking. Some commentators believe the government is bound to fail and that the president may have to step in and call an election during his first 12 months in office.

The new president succeeds Aníbal Cavaco Silva who served as conservative prime minister from 1985 to 1995 and for two consecutive terms as president from 2006. Now aged 76, Cavaco Silva says he is ready for a rest.

It’s just as well President Rebelo de Sousa doesn’t need a lot of sleep, but he can forget about his surf board for a while.

Len Port is a journalist and author, living in the Algarve. Follow Len Port’s reflections on current affairs at algarvenewswatch.blogspot.pt