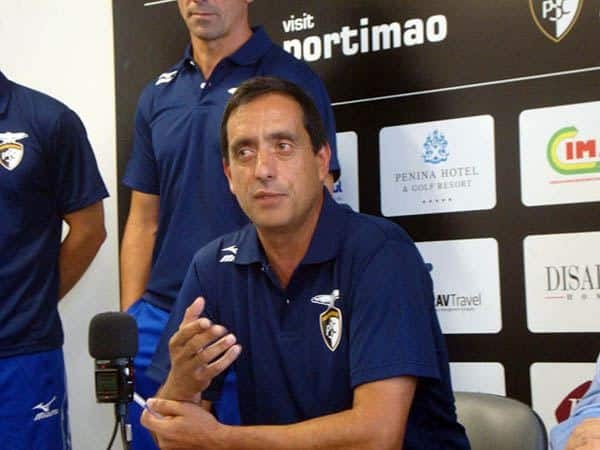 Portimonense football club finally unveiled their new manager at a public presentation in the municipal stadium on Saturday morning.
Following much speculation that had former coach Litos as well as fancied ex-Sporting and Porto B team supremos Abel Ferreira and José Guilherme linked with the post, the job ultimately went to Vitor Maçãs. The 50-year-old already spent a season at the club when assistant to then manager Luís Martins in 2006 and more recently was in charge of third division outfit Mirandela during the 2012/13 playing period.
On the player front, fans will be pleased that Japanese forward Mu Kanazaki has decided to stay in the Algarve alongside fellow first team regulars Ricardo Pessoa, Ivo Nicolau, Fernandinho and Fabrício.
But popular goal-getter Dyego Sousa appears to be on his way to Madeira top division side Marítimo who are expected to send keeper Ricardo Ferreira and attacking midfielder Fidelis on loan in return.
Further reinforcements include Brazilian left winger Acácio Lima (ex-CSA Alagoas) and defender Marcos Vinicius (ex-Guarani) while Alcanense left back Roberto and Luton Town midfielder David Viana are currently conducting trials. Skip Bandele