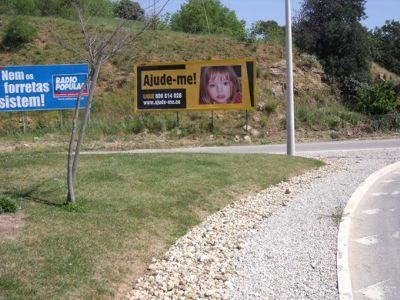 For the next three weeks, posters, pamphlets, billboards, bus back advertising, mail shots and mobile A-van announcements will be targeting residents of the Lagos and Vila do Bispo areas.

New tactics have been employed in this latest campaign to try and raise the awareness of the local Portuguese community in the search for Madeleine.

Algarve design consultants Atelier do Sul have been hired to run the marketing of the campaign. Creative director Suzi Steinhofel said: “We were first approached in January about the campaign and our objective is to effectively approach the local Portuguese community about the case, as it is believed that they were never properly questioned in the first place.”

As the official press release from findmadeleine.com states: “At the time of Madeleine’s disappearance the emphasis was placed more on international appeals and it has been recognised that the local Portuguese residents of Praia da Luz and the surrounding areas have never been properly asked about information they may have to give.”

The message designed by Atelier do Sul is specifically targeted at a Portuguese market.

“We were employed on this campaign because of our knowledge of the Portuguese culture. The message on the adverts says “Não desista de min” meaning: do not give up on me, and this message comes straight from Madeleine and no other party,” said Suzi Steinhofel.

“The Portuguese community are more likely to respond to a plea from a child. People have told me that the campaign has given them shivers when they see it and this is good because we hope that the posters will produce an emotional response with a positive outcome.”

The campaign has brought the Madeleine case back to the forefront of the media agenda in both Portugal and the UK as the second year anniversary of Madeleine’s disappearance approaches on May 3.

Reports of disgruntled residents in Praia da Luz reacting negatively to the campaign have been detailed in Portuguese daily newspaper Correio da Manhã and on British news channel Sky News.

Claims that posters have been “torn down in anger” by residents of Praia da Luz, reported by Sky News, have been countered by some residents in Praia da Luz who spoke directly with the Algarve Resident.

Davis Lewis, who lives in Praia da Luz, told the Algarve Resident: “To be honest I haven´t even seen any posters or billboards near where I live. We have not received anything in the post either.

“I can understand why they are targeting the local Portuguese here because the Brits in the area are pretty transient and the case also had huge international coverage so I am sure if an ex-pat had any information they would have come forward by now.”

He added: “As for claims of people ripping down posters, I haven´t seen evidence of this, however I am not sure the people in the area are very happy about the case being brought to the attention of the media again.

“People in Praia da Luz did everything they could at the time to help and for us here it is more of a case of water under the bridge, people are becoming jaded with the case.  I don´t believe the answers to the disappearance of Madeleine McCann lie in Praia da Luz anymore.”

A spokesman from local medical service Luzdoc told the Algarve Resident: “I have seen two big billboards in the area and quite a few shops have the pamphlets displayed. People don’t seem all that eager to put up the posters in their windows this time but I have not seen anyone ripping upany of the campaign advertising.”

Suzi Steinhofel added: “I have not personally seen a negative reaction from the people of Praia da Luz but I have heard about a certain level of reluctance to the campaign, However, the team here have been prepared for that and have conducted the campaign cautiously because of this.”

For further information about the new campaign please visit www.ajude-me.eu (only available in Portuguese).
1″>news