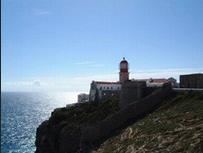 THE TOWN of Sagres, one of the most visited locations of the Algarve’s Barlavento area, is set to unveil a new image in 2007, when refurbishment work, representing an investment of more than five million euros, will be complete.

The second phase of the project is currently in progress and involves a road extension of more than two kilometres and the remodelling of electricity, water and sewage infrastructures, as well as the upgrade of paved areas and the placing of new benches and waste bins in the town centre.

Last year, the first phase of the road extension was concluded and it is expected that a third phase of the project, comprising of further improvements, is due to be launched sometime later this year.

“We are currently concluding the work to construct the Sagres coastal road, which begins at the Pousada (hostel), passes the Mareta beach and finishes at Praça da República. We are also hoping to integrate the upgrade of the EN268, situated at the entrance to the town, in this project,” revealed the President of Vila do Bispo Câmara, Gilberto Viegas. “This particular road, currently in a poor state of repair, is the responsibility of the Instituto de Estradas. Its refurbishment will provide an improved image for the entrance to Sagres, which will be complemented by the work that has already been carried out and is currently in progress in the town.”