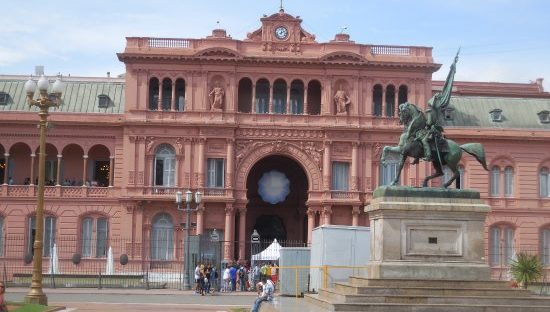 Portugal is one of a clutch of European countries that sent representatives to the inauguration of the new president of Argentina this week – in the hope that the future could be mutually beneficial.

Says Dinheiro Vivo, Peronist leader Alberto Fernández believes his country should look on Portugal as a “second gateway into the Europe Union.”

The transition from the reality in which Argentina is struggling – with debt and economic recession – won’t come easily but it is this point that provides the two countries with ‘common ground’.

Says DV, the current Argentine government “shows admiration” for the ‘Portuguese economic model that emerged from (bailout-enforced) adjustment to growth’.

Said foreign affairs minister Augusto Santos Silva “the new government looks at the Portuguese experience as a lesson worth learning. After all, since 2015 we have managed to turn the page on austerity, and this is the overriding concern now of all Argentines”.

Santos Silva added that Portugal “looks at Latin America as our second home” and is particularly keen to further integrate with Mercosul – the trading bloc made up of Brazil, Argentina, Paraguay and Uruguay – and the Pacific Alliance, made up of Mexico, Peru, Colombia and Chile.

The next step will most likely be an official visit to Portugal by Santos Silva’s counterpart Felipe Solá aimed at “consolidating bilateral relations”.

Explain reports, one way out of Argentina’s crisis will be to increase exports, particularly of agri-foods.

Said Santos Silva after what was described as a brief meeting with the new Argentine leader at Casa Rosada (piictured above) in Buenos Aires: “President Fernández was very clear that economic diplomacy must be a priority for Argentina which needs to make import substitutions. Import less and produce more”.

The president’s inauguration was a relatively low-key affair, with Alberto Fernández driving himself and his girlfriend to congress in their second-hand Toyota.

Said the Economist, citizens have cause for trepidation as well as celebration: Two-fifths of them are poor, “meaning they cannot afford a basket of staple goods, and the share is rising. The annualised inflation rate exceeds 50%” while Argentina’s $57bn loan from the IMF is “the largest bail-out in the fund’s history”.