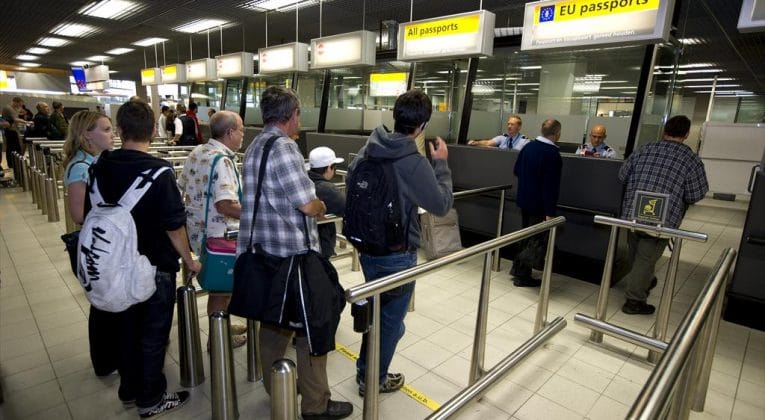 With so many efforts ongoing to reverse the catastrophic British decision to impose quarantine on anyone flying into UK from Portugal, Lusa news agency is reporting that several Portuguese emigrés have returned to England from holiday in their home territories, and been ‘waived through’ London airports, with no checks or advice whatsoever.

As a result, none of them are serving out any kind of quarantine period.

Explains the online, airport authorities appear to have no details about these people, and no way of checking on them even if they suddenly realise their mistake.

Headlining the story: “Confusion installed: Passengers arriving in UK from Portugal without Covid control”, Lusa cites João Faneca who apparently flew into Luton airport with his family from Porto last week, and saw the line of passengers ahead of him passing through passport control “absolutely normally”, despite many having arrived from a country deemed ‘unsafe’ (albeit that this has been heavily criticised click here and click here).

Faneca said: “When our turn came, we showed our documents but they didn’t ask us where we had come from, and we weren’t given any forms to full out”.

“The same happened to other Portuguese emigrés in at least one other London airport, Stanstead”, other sources have revealed.

António Cunha, an advisor to the office of the Portuguese Communities, said he had specific knowledge of “at least three more people who returned from Portugal without any kind of document or contact being requested.”

“No one asked them anything, and as a result they have not put themselves into quarantine”, he told Lusa.

According to Foreign Office travel advice, anyone arriving in the UK by any means whatsoever, including British citizens, has to provide an address at which they propose to serve their 14-day quarantine which is so strict as to prohibit any activity outside the property.

Meantime, the effects the British ‘ruling’ has had on Portuguese tourism in general, and the Algarve in particular, have been devastating (click here).

As calls for diplomatic efforts to speed up a u-turn remain ongoing, the Portuguese ambassador to UK has added his voice to the increasing criticism of Portugal’s effective ‘labelling’’ as a virus ‘hot spot’.

Writing in the Telegraph, Manuel Lobo Antunes stresses the British decision – which is causing “immense” and potentially lasting damage to Portugal – was “based on unclear science”.

He says he will “make no attempt” to hide his disappointment with the situation which he believes has been compounded by the anomaly where the Portuguese islands of Madeira and the Azores have been given a clear bill of health by the Foreign Office yet are still subject to UK quarantine (irrespective of the checks performed on incoming passengers by the autonomous regions).

Says the Telegraph, Mr Lobo Antunes’ comments “will escalate the diplomatic row with Britain following a coronavirus outbreak in and around Lisbon leading to UK holidaymakers being barred from the whole of Portugal, even though its most popular destination, the Algarve, has some of the lowest rates in Europe”.