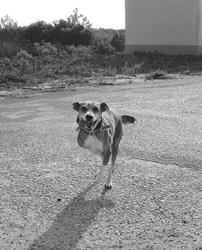 A GROUP of animal loving volunteers from Vale da Telha have opened the doors of New 2 You, Aljezur’s first charity shop, to raise money for abandoned, sick and injured animals.

The group of volunteers, who call themselves ACT (Aljezur Canine and Cat Trust), formed at the beginning of the year and have held several fundraising events for animals in the Aljezur area.

When ACT realised that the abandoned dogs in the open-air Canil (kennel) in Aljezur were exposed to Portugal’s extreme sunlight and rain all year round, the floor was in a poor state of repair and the drains were broken, meaning that infection could spread quickly, they decided that action must be taken.

So far, money from their fundraisers has led to the creation of a roof, a new floor and repaired drainage system at the kennel. Further inspiration for ACT came in the shape of Booty. Booty had been abandoned by his owners after he had broken his leg. He lived rough for many months, trailing his injured leg along the ground.

When he was eventually caught, his skin had worn away from his leg, exposing raw flesh and bone.ACT appealed to the people of Vale da Telha to donate sufficient money to pay for Booty’s treatment. Initially, he had his paw protected with a leather boot (hence his name) and then the leg was amputated.

He has now made a full recovery and is a picture of health and happiness and has been adopted by a couple from Vale da Telha.

In order to continue improvement work at the kennel, pay for disease prevention treatment for abandoned animals, emergency veterinary care and, in time, given sufficient money, fund a spaying and neutering programme for dogs and cats, New 2 You came into being.

The shop is relying on donations from the community and welcomes gifts of clothing, shoes, books, bric-a-brac, household and electrical items.

The group would also love to hear from anyone with a few hours to spare who would like to help in the shop. New 2 You opens every morning Monday to Saturday, and on Thursday and Friday afternoons.