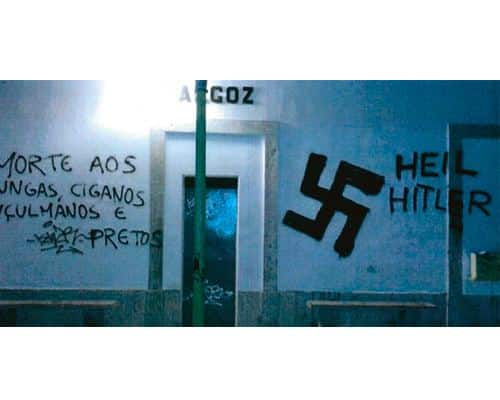 Hate-filled racist graffiti – including a swastika and messages reading “Heil Hitler” and “death to lowlifes, gypsies, Muslims and blacks” – is to be “erased today (January 28), as soon as possible” from the walls of Algoz small railway halt.
The graffiti was found during a routine inspection by Infraestruturas de Portugal (IP).

“We condemn this act along with any other kind of racism and vandalism,” said IP spokeswoman Fernanda Silva, adding that this case was “particularly horrible”.

She guaranteed that IP employees were already “on their way” to the stopping point for trains on the Algarve route to remove the graffiti.

Left-wing political party Bloco de Esquerda suggests the daubings may have been linked to the fact that this week saw International Holocaust Remembrance Day in commemoration of the liberation of Nazi death camp Auschwitz-Birkenau in 1945.

It is lamentable that “after so many decades, there are still people who can defend Hitler’s hideous ideas and anti-Semitism,” the party’s Faro branch said in a statement.