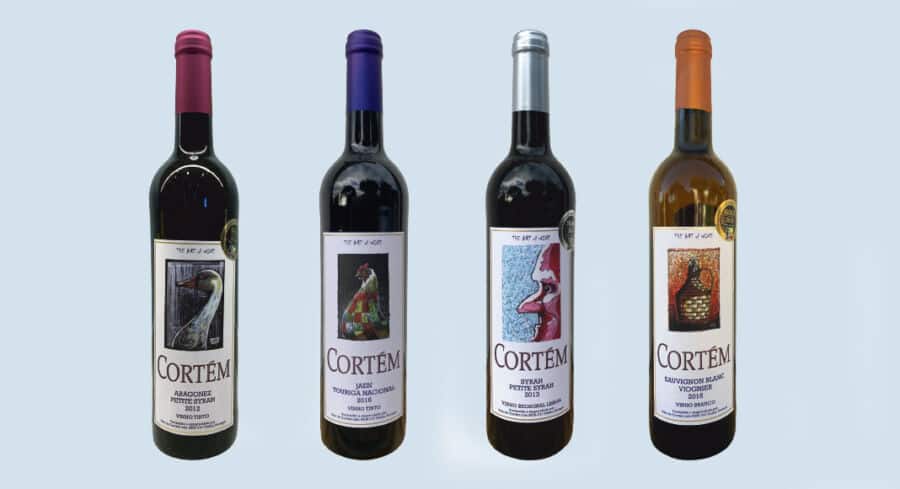 An unexpected encounter with some interesting organic wines.

The owner of this very small organic winery near Caldas da Rainha, in the Lisbon wine region, decided to send me some bottles to try. This is actually not something that happens often as I usually write about wines that I buy myself, but when I received the mixed box of wines to try, what immediately struck me, apart from the funky artwork on the labels, was the large selection of unusual blends made from 16 different grape varieties.

A look at the Cortém wines website roused my curiosity further. Apart from being organic, these wines are almost totally natural, the only additives being a starter yeast and sulphites.

The whole collection of nine different wines is entirely un-oaked and, what’s more, the producer is more or less self-taught, having had no help at all from consultant winemakers.

The winemaker is British resident Chris Price who is a wine lover with a background in sound engineering. Along with his German wife Helga, he purchased some land and a farmhouse in the Ribatejo back in 1993. They eventually upped sticks and moved here 10 years later in 2003 and, by 2006, they had produced their first wine.

Chris started out by reading up anything he could find on winemaking and purchasing a simple wooden press and plastic tubs for fermentation and ageing, making his early wines just like other local farmers.

Much later came stainless steel tanks and, slowly over the years, they have built up to a small annual production of around 15,000 bottles, with no more than 3,000 bottles of each of their wines.

These are wines that need time and the bottles I received ranged from the 2012 vintage up to 2016. These days, all of the wines are aged for two years in steel and then at least a year in the bottle before being released.

So far, I have just four from the selection I received; Aragonês/Petite Syrah 2012, Pinot Noir/Jaen 2014, Cabernet Franc /Petite Syrah 2016 and their orange wine, Sauvignon Blanc/Viognier 2015.

All were good and, for general appeal, the Aragonês/Petite Syrah 2012, with silky smooth tannins and a lovely dry finish, is one of the best, priced at €9.50.
For my personal taste though, I was quite enamoured with the Pinot Noir/Jaen (€10), such an unusual blend with the typical Dão grape Jaen adding fruit and body to the pinot.

But my overall favourite so far is the white, or should I say orange wine, costing €12 and representing excellent value for money for those of us who appreciate orange wines. The prices quoted are all based on cellar-door purchase direct from the winery’s website at vinhoscortem.com

Some of the Cortém wines can also be found here in the Algarve at the organic gourmet shop Tchin-Cheese in Tavira, owned by local organic wine distributor Guillaume Prigent who can be contacted for trade enquiries in the Algarve on guillaume@theorganicwinecollection.com