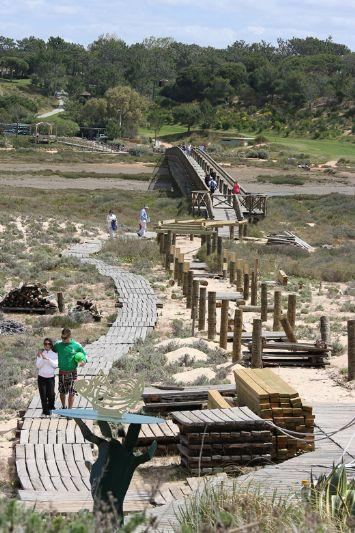 Officials of the Ria Formosa Natural Park have demanded the construction of a raised 190 metre long wooden walkway, costing 50,000 euros, to provide access to Quinta do Lago beach without damaging the sand dunes.

A spokesman from InfraQuinta, the company that manages Quinta do Lago and is responsible for the construction of the new access, told the Algarve Resident: “We did not plan to build this structure, but were forced to by the Ria Formosa Natural Park officials who requested it or else the beach bar would be closed down.”

The spokesman added that the officials at the Natural Park asked for a raised walkway to be built to provide access to the Quinta do Lago beach and beach bar to protect the sand dunes.

“The project, which was approved by the Natural Park in March, will be finished by the end of this month, before the bathing season starts in June,” he said, adding: “The main benefit of the project for users is that it will allow easy access for disabled people, whereas before there was none.”

Algarve Resident reader, Célio Agostinho, who frequently visits Quinta do Lago beach, said: “I don’t think the site is very safe at the moment. There are wooden beams left lying around where children could walk all over them. However, I think that when the access is finished it will be very positive for users.”