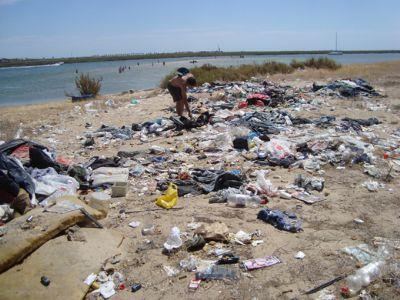 A mountain of waste material, some of it potentially hazardous, has been discovered on an island in the Ria Formosa National Park.

The material was unearthed earlier this month by a group of youths on the small island of Tesos.

Included was foodstuff, fabric, thousands of bottles, aluminium cans and batteries, much of it potentially hazardous material posing a danger to public safety and a contamination threat to the eco-system.

It is suspected that the rubbish has been dumped by a vagrant couple, over a period of one year, but possibly longer.

The couple live on board an old boat which idles along the canals and waterways of the river.

Upon discovering the rubbish, the group Macário +Jovens, who support politician Macário Correia’s campaign for the local elections, and who were on a sport and leisure pursuit, left their kayaks and within minutes collected more than 11 kilos of batteries, the most toxic of all the waste.

A spokesman for Macário Correia, a mayoral candidate for Faro, told the Algarve Resident that the responsibility lies with several entities.

He said: “It is a joint responsibility of Faro city council, Polis Ria Formosa, the Ria Formosa Natural Park and the Regional Hydrographic Administration.”

Tesos island lies within the council of Faro and is part of the Ria Formosa Nature Reserve which has an environmentally protected status.

No one was available to comment from Faro Câmara or the Regional Hydrographic Administration at the time the Algarve Resident went to press on Wednesday.