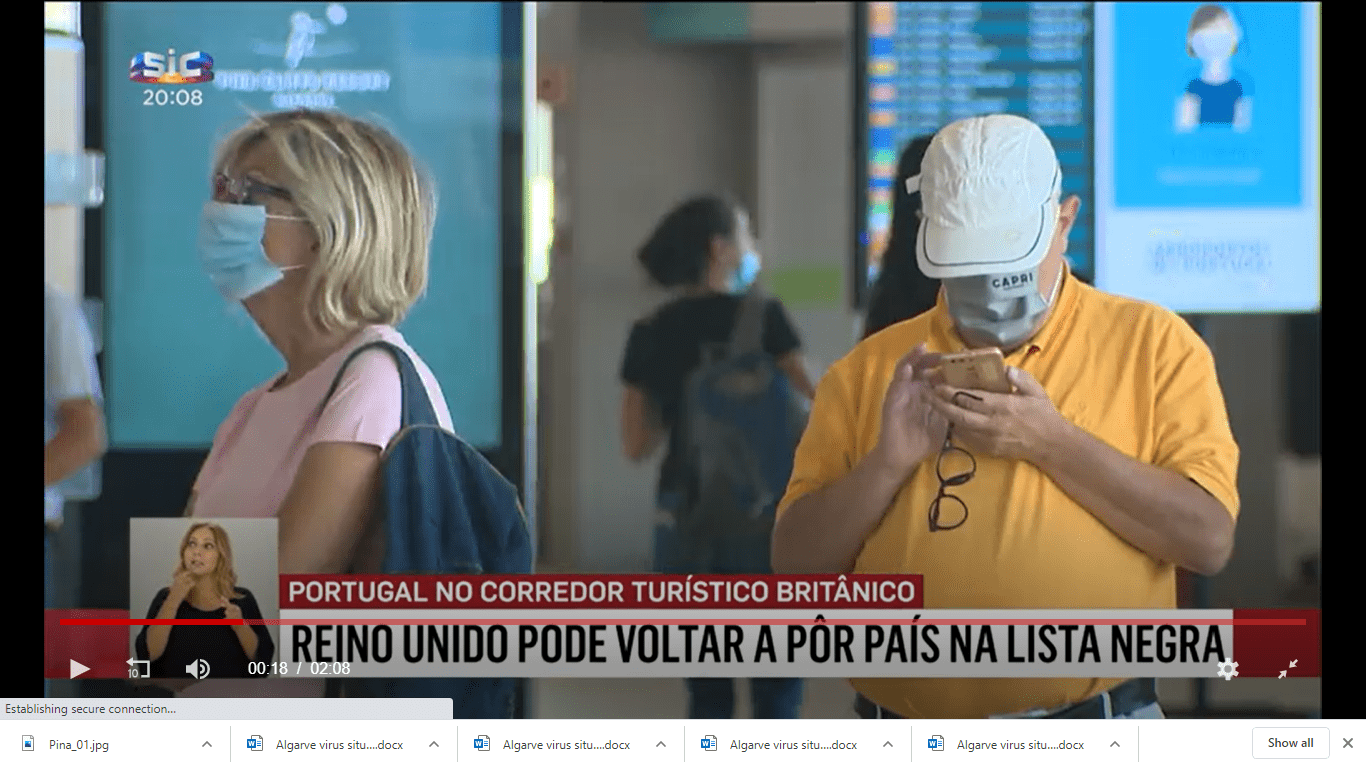 It has been a nail biting weekend for the Algarve as media headlines warn a sudden spike in the number of Covid infections in Portugal could see the UK close the recently opened ‘air corridor’ – causing the 25,000 Brits who have already travelled here to return home to 14-days quarantine.

Adding to the stress has been that – despite assurances that “everything has been sorted” – worrying bottlenecks of passengers have been witnessed again and again at Faro airport.

Following the story of hundreds of people converging on passport control last Tuesday, there were apparently even more caught in a mass queue to get through the turnstiles on Wednesday evening, then again on Friday – and since posting this story we have been informed of further impossible scenes on Monday morning.

Said a holidaymaker who flew in late on Friday: “We witnessed a clear breach of health and safety considerations concerning Covid 19 and social distancing.

“Had we known of the dangerous conditions we encountered beforehand, we wouldn’t have made the trip”.

The words echo those of travellers who contacted the Resident on Wednesday, at which point we repeated the official advice that “everything has been sorted”.

Our source for Friday night’s hour-long melée said the scenes, in his opinion, were “further evidence that the Portuguese government may not be in control of the rising infection rate”.

This gels with predictions in the UK press which started on Friday and have continued since that Portugal could soon be dropped from the UK’s ‘green list’ for travel because infections are now nudging the limit – 20 in 100,000 inhabitants.

The argument that the vast majority are either asymptomatic or so light as to recover easily ‘at home’ is irrelevant for the purposes of decision-making. In other words, the country is in clear and present danger of losing its long-awaited air corridor within less than two weeks of attaining it.

The whole issue of quarantine is still highly contentious. The travel industry would much rather testing be put in place, to avoid people having to go into quarantine and release the fear now that people have to even consider an overseas holiday.

Stewart Wingate, chief executive of Gatwick – the UK’s second largest airport – told the Times that even the government’s limit of 20 cases in 100,000 needs to be questioned. “We should ask whether we are being too cautious”, he said. “Public health is a very important issue but so is the economy”.

And ‘back in Portugal’ that’s the burning question of the weekend: how can the Algarve economy possibly cope with another side-swipe? Losing the air corridor within less than two weeks of getting it could only bury the region’s chances for ‘fighting back’ even further.

Said Algarve tourism authority president João Fernandes on Saturday, “this has really been an almost schizophrenic year. We got the golden opportunity with the window that opened and now suddenly with the development of the epidemiological situation we could suddenly lose this opportunity. Obviously this would have significant impact. We have to hope it doesn’t happen. We have to hope that we can turn things round. Portugal has been exemplary in controlling outbreaks,” he told SIC television news.

But it is certainly not exemplary in sorting out sanitary conditions at Faro airport. As we mentioned above, since posting the article we have been informed by a Briton who arrived in Faro on Monday morning (August 31) that “the amount of people waiting at passport control was a disaster waiting to happen: hundreds and thousands of people shoulder to shoulder and employees just standing watching it happen, chatting amongst themselves”.

Said the new arrival, Faro airport “is not fit for purpose”.